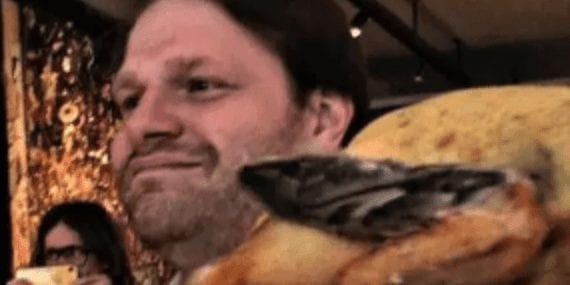 The vegan activists continued their protest despite the taunts from the chef, chanting ‘meat is murder’ and holding anti-meat industry signs.

An activist said: “This guy seemed to be proud of the cruelty involved.

“He was waving dead bodies around far from the food preparation area. I’m sure local food safety officers will be interested in his actions.”

DxE have regularly hit the headlines in recent months for their ‘radical demonstrations’.

A DXE spokesman said: ‘DxE is a worldwide animal rights organisation which promotes peaceful protests to wake society up to the cruelty and suffering involved in meat, dairy, fish and egg production.

“We aim to awaken people’s compassion in order to bring about a vegan world.’

Vegan activism has been met with resistance in recent weeks. On Sunday (March 24) an anti-vegan activist targeted Brighton VegFest, and ate a raw pigs head outside the venue.

He was quickly met by activists from global organisation DxE holding similar signs to those held at The Square.

The demonstration ultimately backfired, as disgusted meat-eaters were reported to have been turned vegan by the gruesome protest.

DxE told Totally Vegan Buzz after the demonstration: “A lot of everyday people walking past are also repulsed by the sight of a pig’s head which is interesting as most of these people eat pigs as well.

“It goes to show what we already know, that people don’t like seeing the faces of the animals they eat. Eating animals is eating a product of torture and death.

“Why is animal abuse so normalised when it’s in a burger but shocking when we see the being behind the burger?”

What do you think of the chef’s reaction to the activists? Tell us in the comments section below!