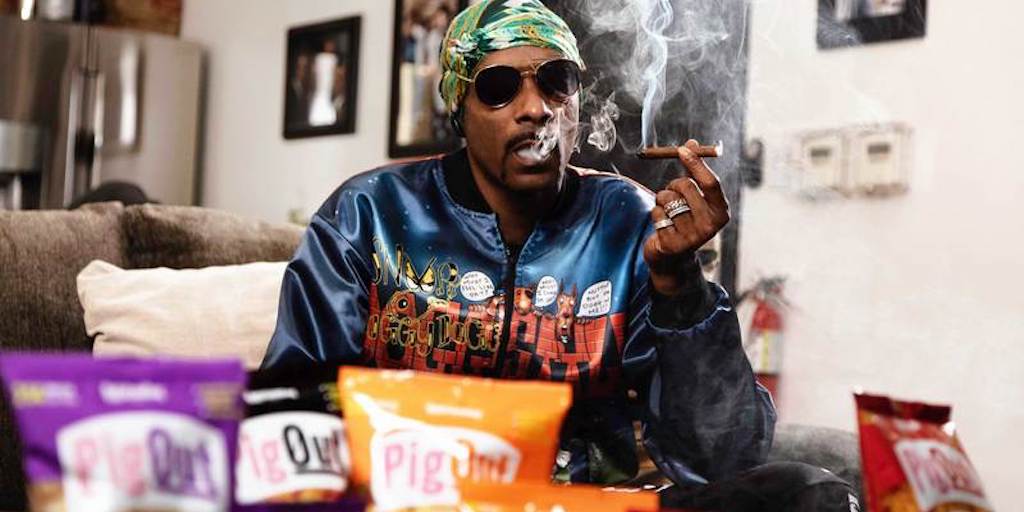 The brand has unveiled PigOut Pigless Pork Rinds, which are animal-free alternatives to classic pig skins.

The new rinds are made with rice and pea protein, baked, and seasoned to taste like pork. They are available in four flavors, Original, Nacho Cheese, Hella Hot, and Texas BBQ. The healthy snacks are free from gluten, soy, GMOs, cholesterol and trans fats. They’re also certified vegan and kosher.

Outstanding Foods is already working on a second version of its PigOut Chips, which they launched in 2018.The new chip will look and taste like a bacon strip, the company said.

Snoop Dogg has often promoted plant-based start-ups. He is an ambassador for Beyond Meat and last November, turned Dunkin’ employee for a day to serve its latest Beyond Sausage Sandwiches to unsuspecting customers in a Los Angeles store.

While Outstanding Foods, described Snoop’s investment signaling ‘a new era for the brand, not to mention the future of munchies at large’, the rapper is also pleased with the alliance.

Snoop said: “I’m excited to partner with the Outstanding Foods team. They got some great snacks coming out…. Wait until you see what else we got up our sleeves, ya dig.”

Snoop Dogg  has also launched a special PigOut website to sell the vegan pork rinds and 10 percent of the sales will be donated to his charity Snoop Special Stars, a non-profit organization that helps inner-city children with youth football and cheerleading opportunities.

“To have Snoop aligned with Outstanding Foods is not only checking off an item on my bucket list, but it’s also exposing Snoop’s millions of fans to our tasty as hell, protein-packed products. I must say, the new PigOut Pigless Pork Rinds pair really well with gin and juice.”

Share this news to let others know of the all new vegan snack in the market.