8 reasons why you should add soya to your daily diet 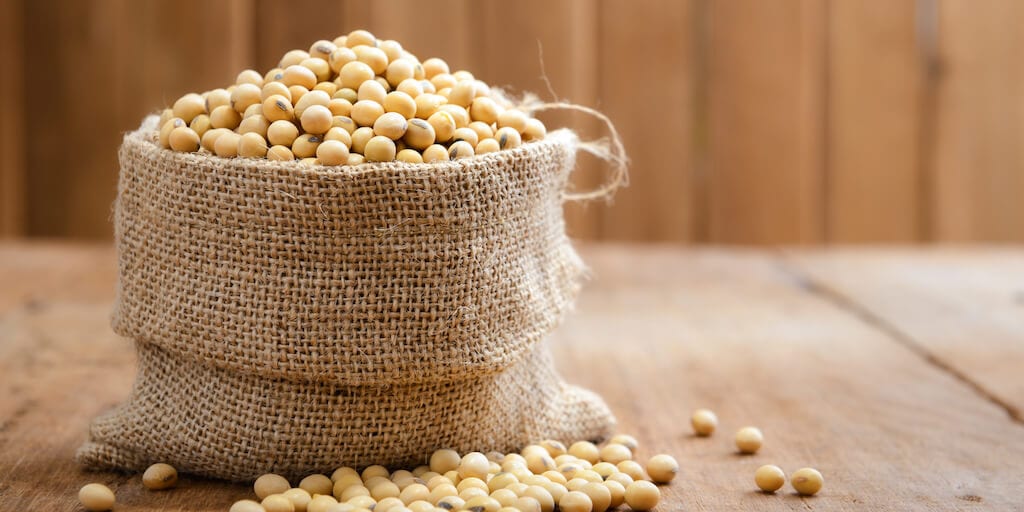 Soybean is hugely popular as a meat alternative, but there are many other benefits of this wondrous legume, which is often ignored. Totally Vegan Buzz brings you the definitive guide to soybean.

Soya bean made from the Glycine Max legume is a rich source of proteins and antioxidants among many other nutrients. Its popularity has long transcended its Asian origins to become a major commodity crop worldwide.

Although 90% of soybean crops are used to feed farm animals, this versatile legume is worth including in your diet for what it brings to the table.

According to data from USDA Food Composition Databases, 100 gms of soybeans contains:

Traditional soy foods are categorized as fermented and unfermented.

Why is soya bean healthy?

Soya bean is packed with nutrients such as:

Soybeans contain active molecules like tocopherols, phospholipids, sphingolipids, carotenoids, lunasin, and isoflavones, which are said to have a myriad of health benefits.

The isoflavones called daidzein and genistein have structures similar to estrogen which have potential benefits in breast cancer, menopause and endometriosis.

The protein quality in soya is considered comparable to animal protein. It contains all nine essential amino acids necessary for healthy muscles and bones. Plus, the bean has added benefits, such as reducing cholesterol as opposed to protein from animal sources, which has shown to raise cholesterol levels in comparative studies.

Soya beans contain compounds called phytosterols, which are structurally similar to cholesterol and steroid hormones. These plant compounds are said to inhibit the absorption of cholesterol by blocking absorption sites thus helping in lowering body cholesterol.

Barring 10%-15% of the total fat, most of the fat content in soy is polyunsaturated, including important omega-6 and omega-3 fats, and has zero cholesterol, which can be highly beneficial for the heart.

Soya is rich in fibre packing almost about 10 grams of fiber per cup, which is good for digestion and gut health.

The bean is a rich source of potassium, which is vital for the proper functioning of numerous processes in your body, including making your heart beat, helping your kidneys to filter waste, and allowing your nerves to conduct impulses.

It also contains other important minerals such as Molybdenum, vitamin K1 (an important micronutrient for its role in blood clotting), Folate, Copper, Manganese, Phosphorus, and Thiamine.

Soybeans, however also contain some anti-nutrients which impair digestion and interfere with protein and other micronutrient absorption such as goitrogens, lectins, phytates, saponins, tannins, and trypsin inhibitors. Fortunately, these compounds are often destroyed during processing methods used in the production of soy foods.

Due to its high nutritional profile, soybean has shown to have several health benefits and experts suggest including it in your daily diet helps you gain a healthy body as well as experience general well-being. Some of its potential benefits are:

Numerous studies back the anticancer properties of soybean. A study showed that the antioxidants found in soybean were effective in killing numerous cancer cells and removing free radicals from the body.

One of many observational studies pointed out that consuming soy products helped reduce breast cancer risk.

Eating soy has also shown to help men who are at risk of developing prostate cancer, which is considered the second most common cancer and the fifth leading cause of death from cancer in men.

According to several studies, soy isoflavones may reduce the risk of diabetes because they possess the ability to increase insulin receptors in the body. Some researchers say soya beans allow cells to absorb more glucose by increasing insulin sensitivity.

Pregnant women are advised to eat soy-based organic products because it is rich in folic acid and vitamin B complex. These nutrients are important to prevent neural tube defects in infants.

Nutrition is critical in pregnancy and it is important to consult an experienced healthcare professional to include healthy foods during pregnancy.

During menopause, estrogen levels drop leading to a host of unpleasant symptoms such as sweating, hot flashes, and mood swings. Research indicates that isoflavones from soy could help reduce menopausal symptoms and the effect is more pronounced in women, who produce equol-a type of gut bacteria, which is able to convert isoflavones into equol.

A 35 study review showed that postmenopausal women recorded a 14% increase in their estrogen levels after supplementing their diet with  soy isoflavone supplements.

Studies on women suffering from osteoporosis showed that soy isoflavones were effective in restoring bone mineral density without causing side effects such as increased risk of stroke, breast cancer, and coronary heart disease normally seen in patients on hormone replacement therapy (HRT). Soybeans are rich in zinc, selenium, copper, magnesium, and calcium, which help promote new bone tissue growth, strengthen the existing tissue, and speed up the bone healing process.

The high protein content of soybean helps you stay fuller reducing the cravings of eating at odd hours. Moreover, since it is a complete protein, it enhances muscle protein synthesis. Several studies have indicated that dietary soy protein has beneficial effects on obesity by lowering plasma cholesterol and triglyceride levels.

According to health professionals, soybeans may help you sleep better since it is rich in magnesium, which is linked to improving the quality, restfulness, and quantity of your sleep.

Soybean trypsin inhibitors are said to reduce pigment deposition whereas, other studies have shown that anthocyanins in soybeans inhibit melanin production.

Soybeans are one of the most nutritionally rich foods on this planet. Including them to your diet can do wonders for your overall health and well-being.

Share this article to let others know the benefits of soya beans.