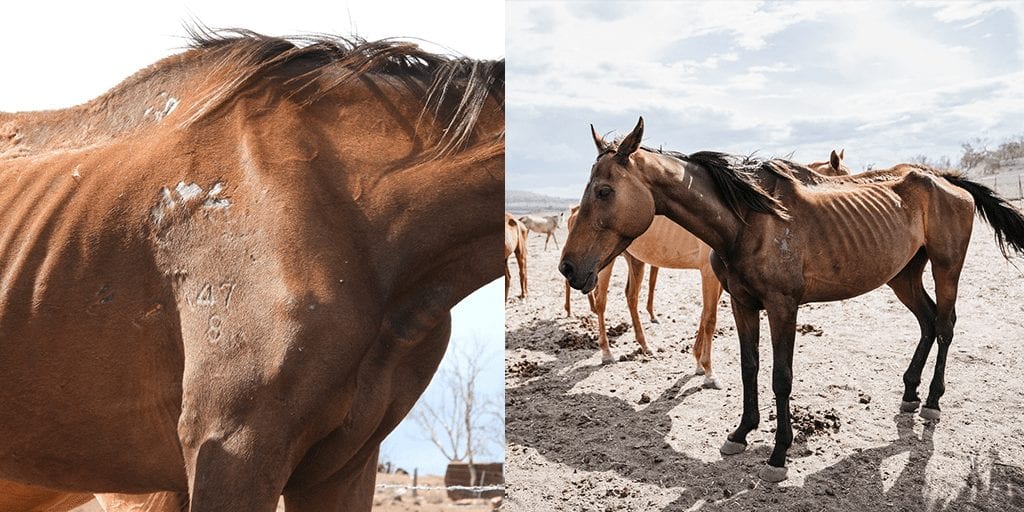 Animal rights activists in Australia are furious with the inaction of government officials after eight skeletal horses were found at an abandoned farm alongside 27 dead animals.

They claim the horses were discovered and accused the Department of Agriculture of ‘little action’ to help the starving animals three weeks after the scene was reported.

As well as the skeletal horses on site, activists found 17 corpses which were decomposing in front of live animals, and more than 10 skeletons.

“After dozens of horses on one property have been left to slowly starve to death, you would think that everything would be done to ensure that the same thing doesn’t happen to the last remaining horses,” the group said in a statement.

The group discovered the harrowing scene in partnership with the Coalition for Protection of Racehorses at a farm near Toowoomba last month.

They concluded that five of the dead horses were racehorses, one of which is still officially listed as active.

“We have grave concerns for these 8 horses who have witnessed their friends starve to death,” the group continued.

“The surviving horses are still not being adequately fed. Witnesses reported only a very small amount of feed is now being given once a day, and it is unclear how often Biosecurity Queensland inspectors are visiting the property to check on the horses and ensure adequate feeding.

“The bodies of their friends still remain on the property, slowly decomposing.”

The group urged animal lovers to demand better from authorities to ensure the horses are properly looked after, and to contact the Department for Agriculture to complain.

“What does it take for the Department to prosecute for animal cruelty? How bad does it need to be? These horses need to be seized and given the opportunity of living a life free of neglect and starvation,” they added.

Biosecurity Queensland, a subdivision of the state’s Department of Agriculture and Fisheries, confirmed it is investigating.

On January 14 a vet visited the site and requested the owner feed the horses.

“The owner has been cooperating and appropriate feed is being provided to the horses in line with the animal welfare direction,” Biosecurity Queensland said in a statement.

“Biosecurity Queensland continues to monitor the care of the horses. Further veterinary assessment of the horses is scheduled for this week.

“While the recovery process will take some time, we are pleased to report the horses are gaining strength and are better able to deal with all weather conditions.”

The ALP has dismissed the claims of Biosecurity Queensland, and the organisation’s Executive Director Chay Neal claimed activists had only seen the horses being fed one time a day with poor quality feed.

But thanks to the activists’ efforts in raising awareness for the issue, local residents have attended the site and provided high quality horse feed several times a day to help them regain their strength.

Share this article to reveal the reality behind the horse racing industry. What do you think of Biosecurity Queensland’s response to this instance of animal abuse? Share your thoughts in the comments section below!