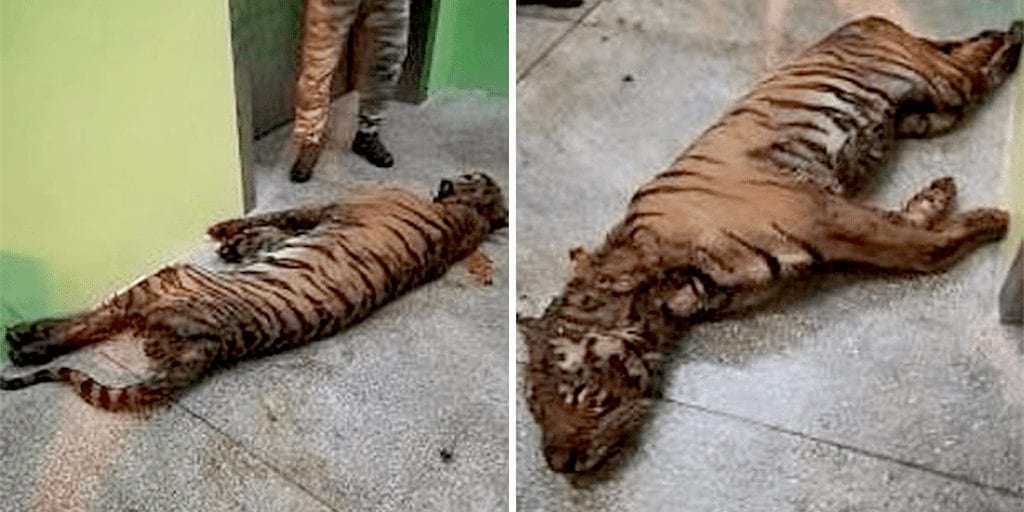 Two zoos in Poland are fighting to rehabilitate nine tigers who were left starving and covered in their own excrement after being shipped across Europe in horrific conditions.

Ten tigers boarded the horrendous journey last month, but one animal died in captivity on the trip which was supposed to end at a circus in Russia.

The trip was cut short after animal welfare organisations intervened, and now the starving tigers are battling for their lives.

A breeding facility in Rome sent the animals to Dagestan zoo as a gift, but the Poznan zoo said the tigers will not be sent to either.

On arrival to the zoos the tigers were ’emaciated, dehydrated, with sunken eyes, excrement stuck to their fur, urine burns, in a total state of stress, without the will or desire to live’, workers reported.

Zoos have managed to feed seven of the animals and give them vital vitamins and mineral salts after being left malnourished by the journey.

Two Italian truck drivers have been charged by authorities in Poland, and a Russian man has also been charged with animal abuse.

Animal welfare organisations are now attempting to raise money to care for animals in distress, including the tigers, and have already raised around £300,000.

The truck took off from Italy on October 22, but was stuck on the border with Belarus for days, leading to the tigers’ rapidly deteriorating health.

In September, 86 tigers who were supposedly rescued from an infamous tourist hotspot in Thailand died in Government custody.

Authorities announced that only 61 of 147 tigers taken from the Buddhist Tiger Temple survived.

But their fate did not improve. Officials said the animals were weakened by relocation and had genetic problems from inbreeding.

Many tigers suffered laryngeal paralysis, which prevents them from breathing, while others fell ill with canine distemper, a virus which damages respiratory, gastrointestinal and nervous systems.

Tigers are often exploited in the animal tourism industry. Earlier this year a shocking video displayed a visibly stressed tiger chained to the ground ready for tourists to take selfies.

The video, which was posted on National Geographic’s Instagram page, was reportedly filmed at Thailand’s Phuket Zoo.

It shows a tiger pacing in tiny circles around a small platform, with a short chain keeping the animal restricted to a small spot.

Share this article to expose the reality behind the animal tourism industry.