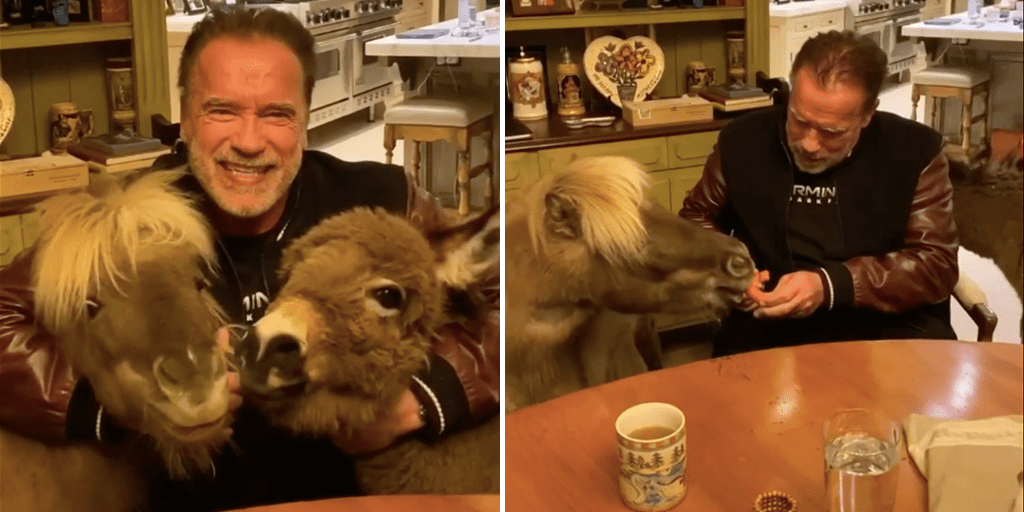 Arnold Schwarzenegger has suggested listening to experts, staying home and eating vegan food are the best ways to remain safe from the coronavirus outbreak.

As a law-abiding citizen, Arnold Schwarzenegger has grounded himself at home following instructions that urge seniors in California to isolate themselves during the coronavirus outbreak.

Sitting at his kitchen table with his pet pony-Whiskey and pet donkey- Lulu, the 72- year old veteran actor filmed a video urging his 19.7 million followers to stay home and avoid spreading the COVID-19 virus.

Captioning the clip, he wrote: “Stay at home as much as possible. Listen to the experts, ignore the morons (foreheads).

“We will get through this together.”

In the video, he is heard saying: “See, the important thing is that you stay at home, because there’s a curfew now.

“No one is allowed out. Especially someone who is, like, 72 years old. After you are 65, you are not allowed out of the house anymore in California. So we stay home and we eat here”

As his pets ate carrots off his hands and continued to hover around him, the former California governor said: “Oh yes that’s yummy. Lulu loves carrots, Whiskey loves carrots.

“I (too) just had my little bit of vegan food,” he added.

Continuing to address his viewers, he said: “See that is what we do. We don’t go out, we don’t go to the restaurants, we don’t do anything like that.”

While there is still ambiguity whether the former politician and bodybuilder is vegan,  the actor has extolled plant-based food in the past.

He told Men’s Health at the time that he turned more ‘health-conscious’ in recent years, moving away from his old diet that had him eating 10 to 15 eggs a day and a lot of meat.

“Now I eat more oatmeal, and greens, and vegetables, and healthy foods,” he said.

“I stay away more from the meats and more from animal products, and animal proteins, because there was this misconception that that’s the only way you get big and strong, so now I back off that and I feel much better.”

“As I got older and I started reading up on it, I recognised the fact that you really don’t have to get your protein from meat – or from animals. So we started going more in a direction of a vegetarian kind of diet.

“Now we’re doing it the right way, with spices, and all of a sudden I love it much more than the meat.”

Share this story to let others know about the importance of staying safe during the coronavirus period.