Vegan Actor Tabitha Brown is PETA’s ‘Person of The Year’ 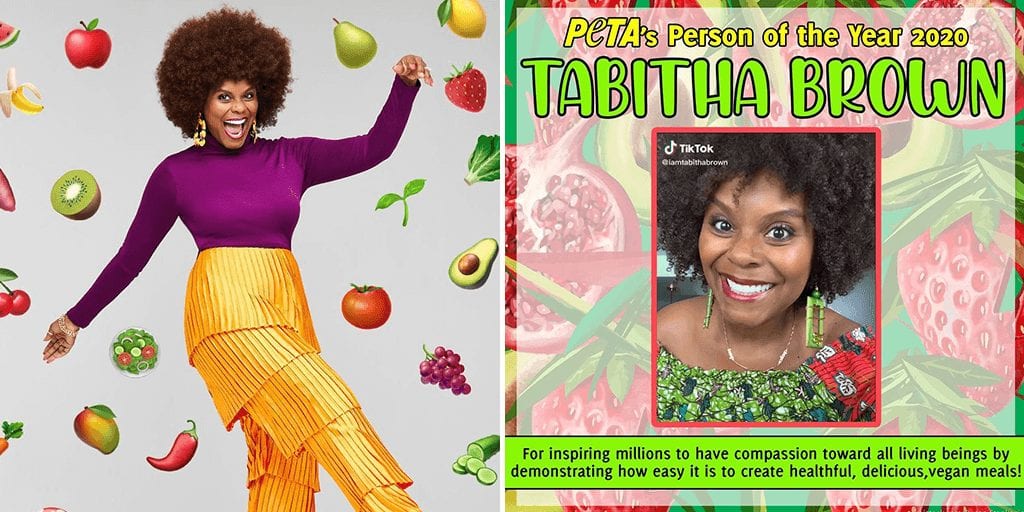 “Tabitha has brought vegan living into the spotlight and compassion for animals into the hearts of millions of people around the world.”

Actress and vegan food Influencer Tabitha Brown has been named ‘Person of The Year 2020’ by PETA.

The star, who went viral after posting her carrot ‘bacon’ recipe on TikTok, also bagged second place in the top 10 TikTok creator list of 2020.

Since her debut video, Brown, who creates mega-popular 60-second vegan cooking tutorials has signed with major talent agency CAA and appeared on a slew of TV shows including The Ellen Show. Recently, she hinted that she’s ‘working’ on a vegan cookbook.

Brown, who went vegan in 2017, believes showing millions how easy it is to cook delicious vegan food helps her “save more animal lives in the process.”

‘Brought vegan living into the spotlight’

According to PETA, Brown with her infectious joy and one-of-a-kind charm, has “brought vegan living into the spotlight and compassion for animals into the hearts of millions of people around the world.”

In an Instagram post, the vegan charity also wrote that Brown is “a hugely influential figure in the Black vegan community, helping to dismantle the harmful stereotype that being vegan is “for white people”

Company of the Year

The vegan organization won the “2020 Company of the Year” award.

It was founded during the pandemic to fund and coordinate food deliveries from vegan restaurants to organizations serving people with food insecurity thereby helping support the restaurant industry and vulnerable people alike.

“Support + Feed and Tabitha Brown are both changing the world, one delicious vegan meal at a time,” Newkirk said in a statement.

“PETA is honoring them both for being glimmers of vegan hope and joy in the weirdest year ever!”

Share this story: Vegan Actor Tabitha Brown is PETA’s ‘Person of The Year’.