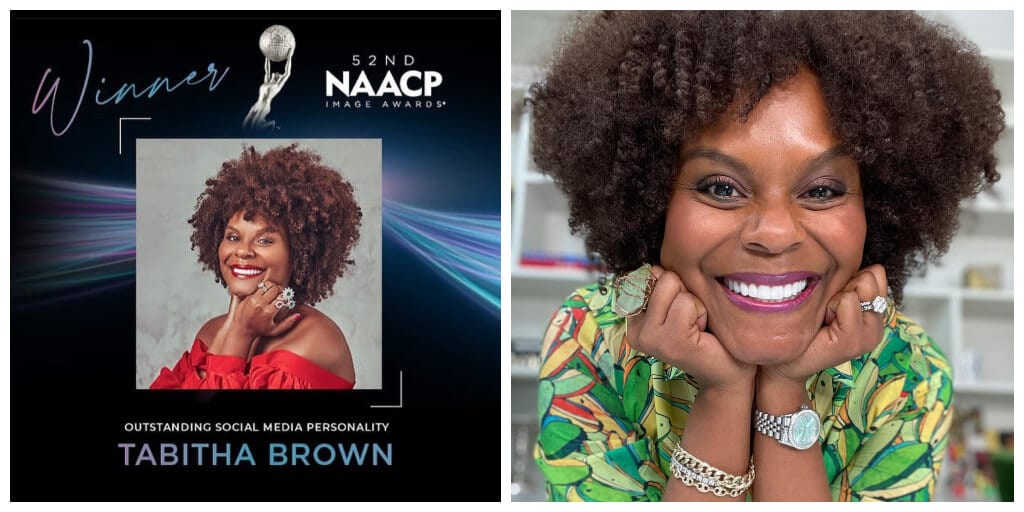 Vegan TikTok personality and actress Tabitha Brown has won a major award that celebrates outstanding achievements of people of colour in the fields of television, music, literature, and film and also recognizes individuals or groups who promote social justice through creative endeavors.

The 42-year-old scooped the Outstanding Social Media Personality at the 52nd National Association for the Advancement of Colored People (NAACP) Image Awards.

This is the first year NCCP awards have included this category to recognize social media creators.

Visibly excited and emotional, Brown, in her acceptance speech said: “It is such an honor to be … awarded for just being myself.

“I have dreamt all my life to perform and make people laugh and feel something.”

After thanking her husband, children and father, Brown said: “When your people celebrate you and see you and uplift you, it’s better than anything in the world.”

Acknowledging Brown’s contribution, the awards team stated on its website: “Perhaps most notable about Brown is her ability to draw viewers in and feel welcome into her world – even if it is through a screen.

“Her delicious, creative, yet simple recipes, sautéed with compassionate messages, and sprinkled with a pinch of humor, attract a large following that finds comfort in the ‘auntie they never had.’

“ Though the term “vegan” often polarizes audiences, Brown reinvents the idea of veganism, demonstrating that it can be accessible, inclusive, and accommodating for anyone. “

It further added: “ An unconventional way to rise to stardom, Brown paved a path to achieve her dream of being in front of a camera without sacrificing – and, in fact embracing – who she is and the unique, wholesome qualities that make her Tabitha Brown.”

This isn’t the first award Brown has won since she rose to fame after her carrot ‘bacon’ recipe video on TikTok went viral.

Last year, she won PETA’s Person of the Year award and also came in second place in the top ten TikTok creators of 2020

Brown is also very successful outside of social media. She currently has her own show called All Love on the Ellen Network and will also join the cast of the upcoming Showtime series The Chi in May.

Additionally, the vegan influencer now has her personalized merchandise featuring her quotes, catchphrases, and famous lines and is on her way to releasing her first vegan cookbook, Feeding the Soul (Because It’s My Business) later this year.