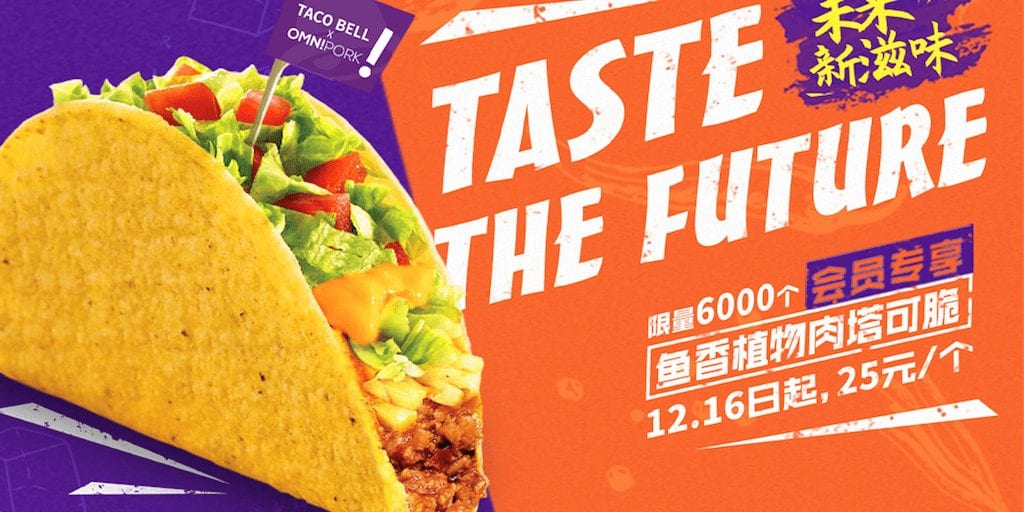 Taco Bell has introduced a limited-edition taco made of plant-based pork in its Shanghai locations.

With pork prices in China skyrocketing in the aftermath of the African Swine Fever outbreak, the Chinese food scene is gradually changing to accommodate meat-alternatives as the population veers to choices that are better for their health, animals and the environment.

This opportunity has led many plant-based food-giants to enter the Chinese food market.

Its vegan OmniPork is made from shiitake mushrooms, pea protein, soy protein, and rice protein. It is way healthier than its meat counterpart with 0mg of cholesterol and 86 percent lower saturated fat per 100 grams of raw serving.

The company has collaborated with Yum China, the group that owns Taco Bell in the Mainland to launch its first vegan OmniPork taco in Taco Bell’s Shanghai outlets.

Named the OmniPork Crunchy Taco, the dish features the meat-free ground pork cooked with spicy Yu Xiang sauce and lettuce to suit the Chinese palette. The chain has rolled out a limited edition of the dish and will be selling 6000 of the tacos as part of the trial.

When announcing the news, Green Monday founder David Yeung said: “Yum China has once again proven why they are a market leader and trendsetter in their sector. From our first meeting about introducing cutting-edge plant-based protein to Mainland Chinese customers to full launch at all the outlets under the Taco Bell brand, it has been nothing short of a fun collaboration.

#XmasBell #PigSavingBell ???? It took A LOT of heart and effort from two teams to make this happen, but this milestone launch by Taco Bell Shanghai and Omnipork is now a reality! Limited time offer as they squeeze this in right before Xmas peak season! Big kudos to everyone who helps make this happen #Omnipork #TacoBell #plantbased #vegan #vegetarian #veg #yum #yummy #tasty #taste #eat #shanghai #healthy #crueltyfree #food #foodie #foodstagram #taco #MakeChangeHappen

“Their group is well known for their focus and insight on localized menu innovation, which is why this fusion Yu-Xiang OmniPork Taco—a combination of classic seasoning in a novel taco presentation—is bringing such wow effect to both local and foreign patrons.”

Although Taco bell is only trialing the omnipork taco, Yeung is confident about the results.

“We are confident that this special promotional launch is the beginning of a long partnership between the Green Monday group with Taco Bell as well as other brands under the Yum China portfolio,” he said.

Taco Bell is working hard on expanding its vegan range in order to cater to the growing demand for plant-based foods.

In September, it launched its ‘first ever dedicated in-store vegetarian menu board’ across stores in the US.

Recently, it introduced its very own Oatrageous Taco, made with vegan oat-based meat to select restaurants in Finland and Spain and is working on plans to expand to additional European locations, and possibly the United States, in 2020.

Do you want Taco Bell to launch the OmniPork Crunchy Taco in your country? Share your thoughts in the comments below!