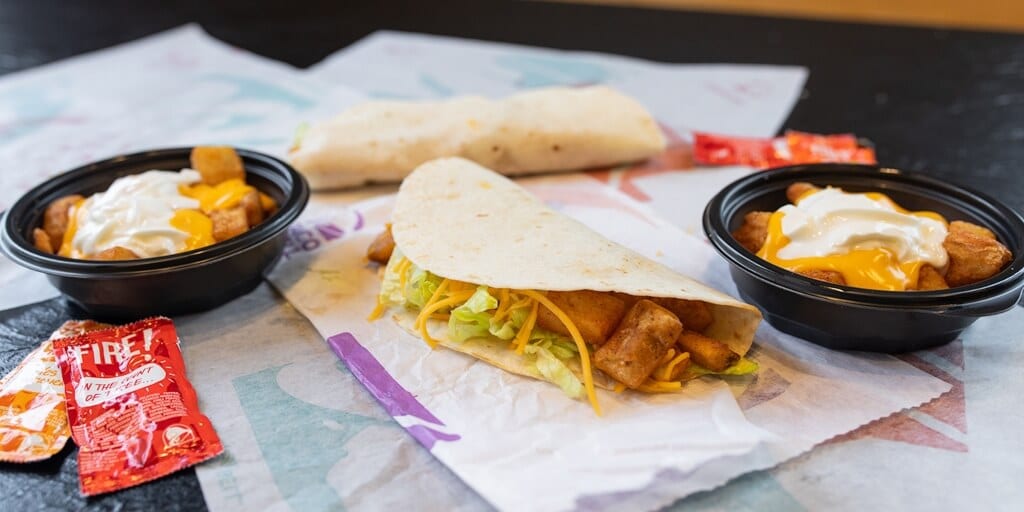 The fast-food chain is not only bringing back potatoes but also trialing Beyond Meat for a new plant-based offering.

Taco Bell has announced that potatoes will be officially back on its US menu following fan pressure.

The move comes after the beloved spuds were snipped off the menu in July 2020, to pare down the menu in light of the coronavirus pandemic and make room for other plant-based options in the future.

However, after the overwhelming backlash, customers will be able to order their beloved cheesy fiesta potatoes and spicy potato tacos as well as substitute potatoes for the filling in any other offering starting March 11.

“The return of our beloved potatoes is just the first step in showing our fans the strong continued commitment to vegetarians we are making this year,” Taco Bell’s Global Chief Food Innovation Officer, Liz Matthews, said.

“We have long been a leader in the vegetarian space, but this year, we have more meatless options in store that vegetarians, veggie-curious, and even meat-eaters will love.”

The good news doesn’t end there. Taco Bell has also teamed up with Beyond Meat to work on a new plant-based offering for the US menu.

According to the fast-food chain, although, it earlier vetoed the idea of adding plant-based meat to its menu, it chose to go with Beyond Meat, since it is “a category leader “with strong mass appeal among younger customers.

“In teaming up with Beyond, we want to do it differently than everyone else has done it,” Matthews said.

“So what you will see from us is something that you haven’t seen – and, it will have that Taco Bell innovative kind of twist.”

This collaboration is by no means the first time Taco Bell and Beyond Meat have teamed up for a plant-based offering. Last June, it rolled out a limited-edition Beyond Meat taco in Shanghai.

Taco Bell Spain and Finland already have permanent vegan options on their menus. Both offer pulled oat meat, which was recently added to 53 UK menus following a successful trial in 2019.

Share this story to let others know about Taco Bell adding potatoes back to its menu.