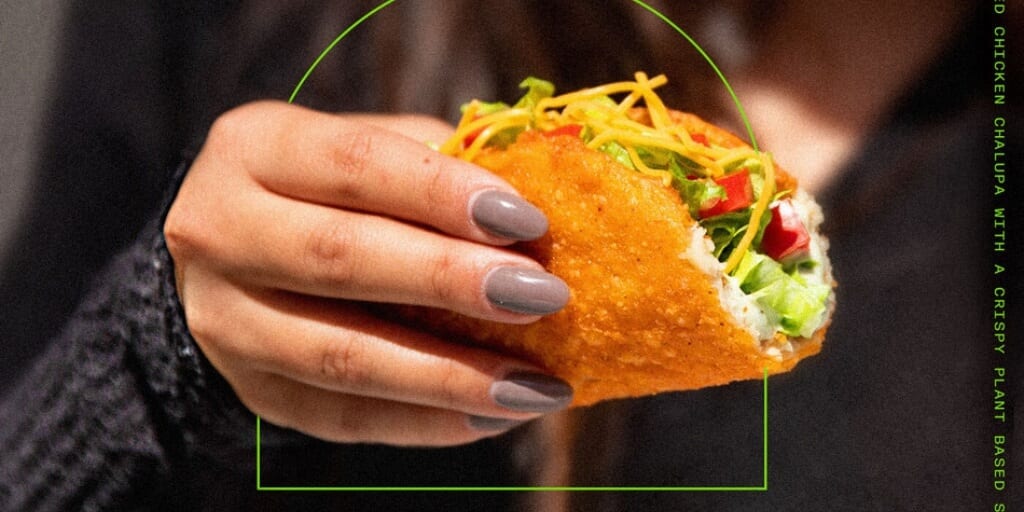 The limited-edition plant-based ‘mouthful of delicious goodness’ claims to be ‘not only flavourful but also uniquely Taco Bell’.

Fast food giant Taco Bell has confirmed it will be testing a vegetarian version of the hugely popular Naked Chicken Chalupa at one location in Irvine, Calif.

It is part of Taco Bell’s continued efforts to make fan-favourite menu items available to vegetarian, vegan and “veggie-curious” customers with innovative twists.

The latest item called The Naked Chalupa with Crispy Plant-Based Shell will replace the fried chicken with a breaded pea protein blend, crisped and shaped into a chalupa shell. It is then filled with lettuce, cheddar cheese, diced tomatoes and flavorful avocado ranch sauce for a ‘mouthful of delicious goodness’.

The shell is certified vegan by the American Vegetarian Association and similar to other Taco bell orders, customers can customize the dish and make it fully vegan by excluding dairy.

“We’ve seen our industry follow patterns of sameness, but we understand that consumers are looking for creativity and craveability in this space.

“So whether someone is craving plant-based protein or crispy chicken or gooey cheesiness, we have something that’s not only flavourful but also uniquely Taco Bell.”

The Naked Chalupa with Crispy Plant-Based Shell is priced at $3.49 and will be available until 27 June, while supplies last.

Earlier this year, the brand revealed it teamed up with Beyond Meat to test a new innovative plant-based protein at one of its restaurants in California, US.

The vegan protein was developed at the Taco Bell Test Kitchen using a blend of chickpeas and peas in a bid to appeal to an even broader audience of consumers.

A spokesperson for the company said at the time: “Taco Bell chose to team up with Beyond Meat as a category leader with a proven track record of attracting younger customers with its irresistibly delicious plant-based offerings.

“By testing and offering a wide breadth of meatless options, Taco Bell doubles down on its pledge to bring more innovation to the vegetarian space.

“Fans who are vegetarians, veggie-curious, and meat-eaters will be bound to find their next plant-based obsession.”

Specific details on where and when it will launch remain under wraps.

Share this story: Taco Bell is testing a vegan chalupa shell to cater the ‘veggie-curious’.