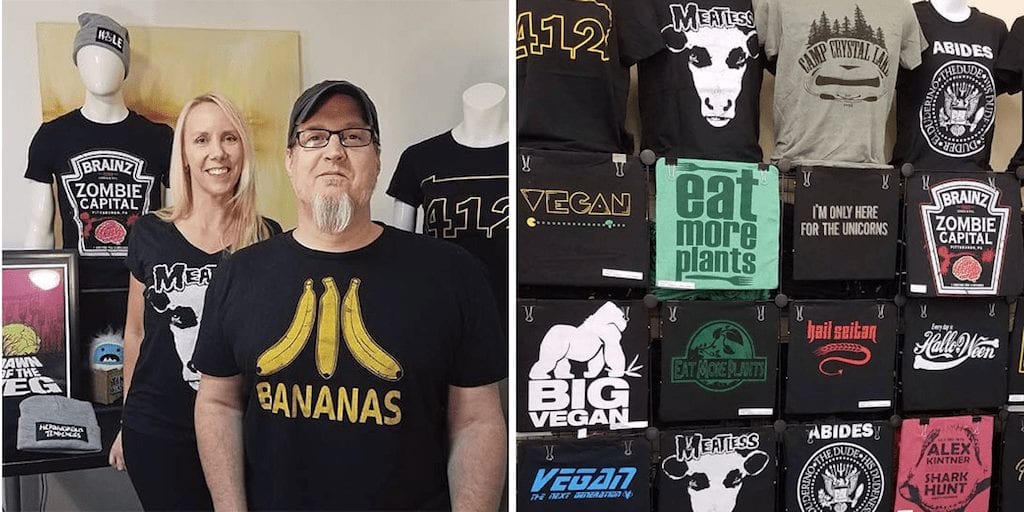 A husband-wife duo have set up their Goods and Evil brand to sell designs inspired by pop culture and veganism.

Dan and Deborah Angeloni, who live in Tarentum decided to make their own apparel after realizing that no one sold vegan shirts that suited their tastes.

Dan was an architectural student and after taking a screen-printing class, the couple decided they would launch their own brand of apparel reflecting their fetish for old horror movies, crazy-cool Japanese toys and dietary choices.

“When we first became vegan, we noticed there were no vegan shirts that reflected our interests and style,” said Mrs. Angeloni.

“No one was making things we wanted to wear.”

Thanks for sharing! Reposted from @madam_seitan (@get_regrann) – I'm one happy #vegan – got to meet the Queen Beast herself @alissawhitegluz and @archenemyofficial !! Story time: at the beginning of this year I was at a low point and needed to soothe a broken heart with some heavy music. That's how I discovered Arch Enemy (and reignited my love of the Misfits!). I ended up watching some interviews with Alissa and @doylewolfgangvonfrankenstein and was so moved by their descriptions of veganism that I decided to finally take the plunge from vegetarian to vegan. It was like I had discovered a missing piece of who I was meant to be. I only wish I had a role model like Alissa when I was growing up!! ???? T-shirt from @goodsandevil ??

Armed with an in-house printing press, the couple now run their Goods and Evil brand from home.  70% of their merchandise is aimed towards a vegan clientele.

Although, they specialize in graphic T-shirts that “are usually layered with reference or meaning,” they also design hoodies, ball caps, beanies, decals and posters.

One of the couple’s design shot to fame after Doyle Wolfgang von Frankenstein, the original guitarist for the punk rock group the Misfits, wore a T-shirt featuring a cow’s head below the word Meatless, a vegan-inspired play on the band’s logo.

A photo of the guitarist wearing the shirt first went viral in September 2018 and the Angelonis were flooded with enquiries from interested buyers. He wore it the second time a year later again spiking sales for the couple.

“Every time he wears it we notice an increase in followers and sales,” said Dan Angeloni.

The couple’s recent design concept “Dawn of the Veg,” features a lettuce head with forks in the background.

“The Dawn of the Veg is a recent design and mashes two thing up we love: horror and a vegan lifestyle, while sending an underlying message that a plant-based lifestyle is on the horizon,” explains Dan Angeloni.

Although the couple think of launching their brick-and-mortar store, they feel their current arrangement gives them a wider audience.

Goods and Evil merchandise is sold online, at Arkham Gift Shoppe in Allison Park and at festivals throughout the country.

Which is your favourite vegan fashion brand? Share your thoughts in the comments below!