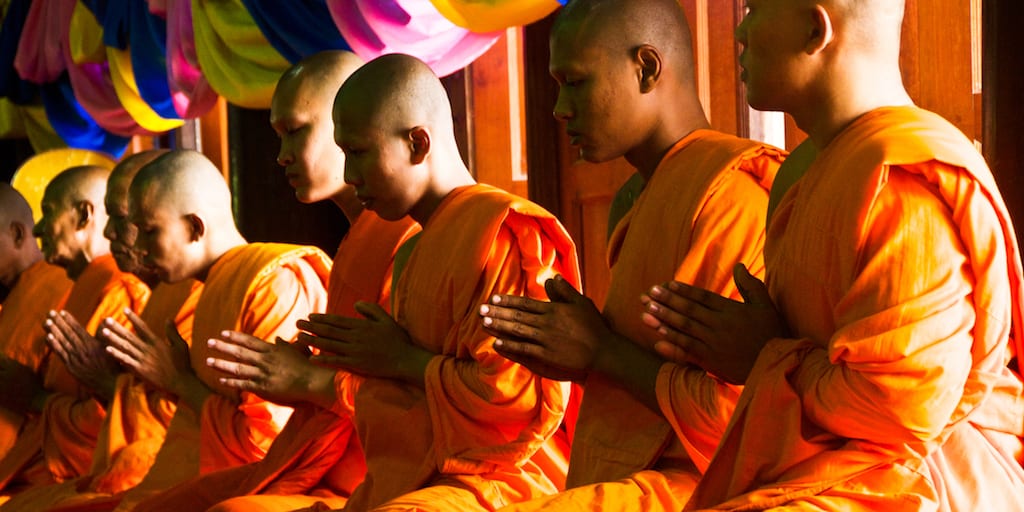 A Buddhist temple in the south of Bangkok has found a creative and sustainable method to curb the growing menace of Thailand’s plastic waste.

Thailand ranks fifth in the highest contributor of plastic to the world’s oceans list, and a temple in the south of Bangkok has launched a campaign to reduce the amount of plastic waste the country produces.

Monks residing at the Wat Chak Daeng temple have been recycling plastic bottles for over two years under the watchful eye of Phra Maha Pranom Dhammalangkaro, 54, the abbot of the temple in Samut Prakan province.

With the drive, the temple aims to reduce the amount of plastic entering the Chao Phraya River, which flows south to the Gulf of Thailand in the western Pacific Ocean.

He says that he was struck at the idea of recycling plastic after his temple was littered with swarms of plastic waste.

While the temple’s initial effort of burning the plastic bottles to make fuel proved inefficient, the monks switched to making t-shirts and eventually started making robes.

The robe making process involves collecting bottles and washing them after removing the caps and labels. The cleaned bottles are then crushed into plastic rolls.

These plastic rolls are further treated to make polyester fibres, which are then stretched, dyed and woven into fabrics for saffron-coloured robes.

The project has also become a source of income for volunteers, many of whom are local housewives, retirees and disabled persons who help with sorting the waste.

Need to clean up the environment

“We all need to waste less and recycle more. That is why we encourage people to collect recyclable plastic bottles and bring them to us,” says the head monk.

“By collecting and donating plastic bottles, they can make merit just as if they had donated robes. This way they can help clean up the environment.”

“Donating one kilogram (2.2 lb) of plastic bottles can help make a full set of monk robes, which has a high return value, both in terms of money and merits,” explains the senior monk.

Maha Pranom also educates the local communities on the need to reduce and recycle plastic.

“If you don’t collect these plastics, where do they end up? In the stomachs of dugongs, dolphins, whales, and many other sea animals. Then they die,” he says while interacting with the locals.

The temple’s initiative has been lauded by conservationists and environmentalists.

“Not only are the monks making a concrete contribution to recycling, but they are raising awareness in their communities,” said Chever Voltmer, Director for Plastics Initiatives at Ocean Conservancy.

What do you think of the temple’s effort in reducing plastic pollution? Share your thoughts in the comments below!