The brutal realities of leather: one billion animals slaughtered and abused every year | Totally Vegan Buzz
Skip to content

The brutal realities of leather: one billion animals slaughtered and abused every year 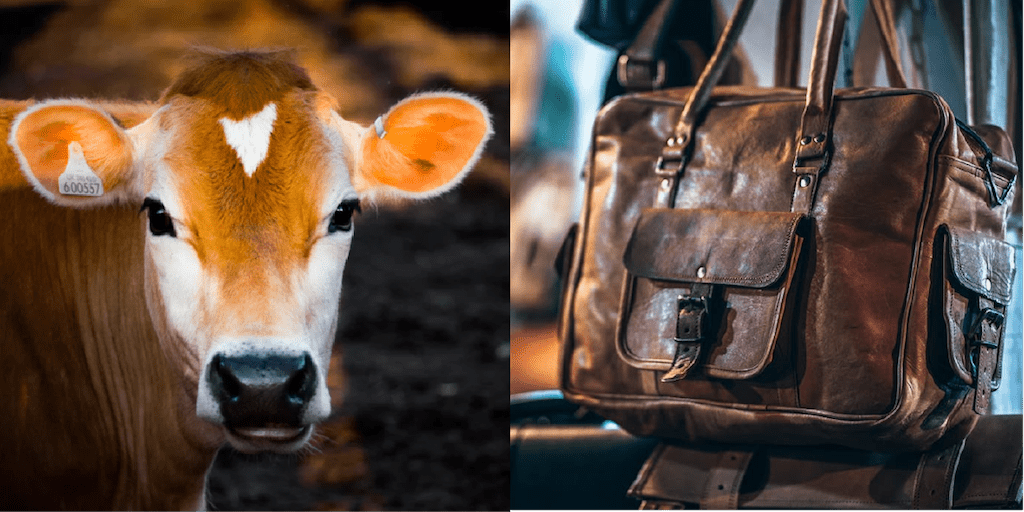 Every year the skin of a billion slaughtered animals is turned into leather for our wallets, jackets, handbags, shoes and furniture. Yet for a product so visible in society, misconceptions about the industry behind it are still incredibly common.

Many people assume leather is sourced only from cows, and therefore simply a by-product of the meat industry, but this couldn’t be further from the truth.

Even the skin of baby animals is used, and is considered more valuable in the leather industry because of its softness.

Newborn male calves discarded by the dairy industry are killed and used for leather, and even unborn calves taken from their slaughtered mothers (referred to as slinks) have been reported to have their skin used by the leather industry.

The perception that leather is simply a by-product of the meat industry is simply not true.

Leather is not a leftover from the meat industry that would go waste if not used. In reality it comes from animals specifically slaughtered for leahter.

In fact, in order to produce our wallets, handbags and shoes, one estimate suggested the leather industry needs to slaughter 430m cows annually by 2025 to keep up with demand.

There is also no requirement to label leather products, so it is often impossible for a consumer to know which animal a leather product came from and which country was it raised in.

Research has found that in many cases leather advertised as cow or pig skin actually comes from cats and dogs sourced from China.

To make many sought-after leather products, a process called tanning is used. This involves use of strong chemicals to prevent the animal skin from decomposing.

Before tanning, the skin is unhaired, degreased, desalted and soaked in water.  Tanning even has a negative impact on the tannery workers and the environment.

The leather trade in India is one of the biggest in the world, where cows are marched to slaughter while suffering abuse and unbearable pain.

Many states in India forbid the slaughter of cows as they are considered sacred.

Cattle are therefore forced to walk long distances to be brutally killed. Exhausted cows are beaten and tortured to keep them moving.

Maneka Gandhi, a veteran campaigner against animal abuse, told The Independent: “To keep them moving, drivers beat the animal across their hip bones, where there is no fat to cushion the blows.

“The cows are not allowed to rest or drink. Many cows sink to their knees. Drivers beat them and twist their battered tails to force them to rise. If that doesn’t work they torment the cows into moving by rubbing hot chilli peppers and tobacco into their eyes.”

Many cows are crammed in trucks and succumb to death during in the journey.

Gandhi added: “The law says you cannot transport more than 4 per truck but they are putting in up to 70.

China, another big exporter of leather to the US and Europe, also kills huge amounts of cats and dogs every year for the supply of leather.

Peter Li, associate professor of east Asian politics at University of Houston-Downtown and a China policy specialist and consultant for Humane Society International, said: “The dog leather trade is dependent on the dog meat trade; since killing dogs for meat is not illegal in China, the byproducts, including skin and fur, may be used for other purposes.

“Dog leather or dog fur use in garments or other products are not that common in China. While there are a few sweatshops producing dog furs in different places, dog fur is largely a byproduct of dog meat trade.”

The fight against the leather industry has a huge amount of backing, and the realities of the industry are becoming more widely understood.

Investigative videos shared widely on social media, such as this PETA video narrated by Pamela Anderson, has accelerated a shift in public opinion.

As people become aware of the real cost of leather for animals, workers and the environment, demand for leather alternatives is growing.

Research by Grand View Research Inc. found that the global synthetic leather market is expected to reach $45b by 2025.

Companies are investing into research and development to capture the growing market. Ananas Anam has started manufacturing and distributing Piñatex, a natural leather alternative made from pineapple leaves.

More and more vegan celebs, including Kendall and Kylie’s sisters, Pamela Anderson, Lucy Watson, Penelope Cruz, Alicia Silverstone and Ruby Rose have spoken up against the use of animal skin in clothing and accessories.

So while the leather industry is still huge, there is nowhere to hide for an inhumane process.

With more companies investing in alternatives, and huge public condemnation for the use of real animal skin, the leather industry seems doomed to shrink.

What do you think of the leather industry? Tell us in the comments section below!