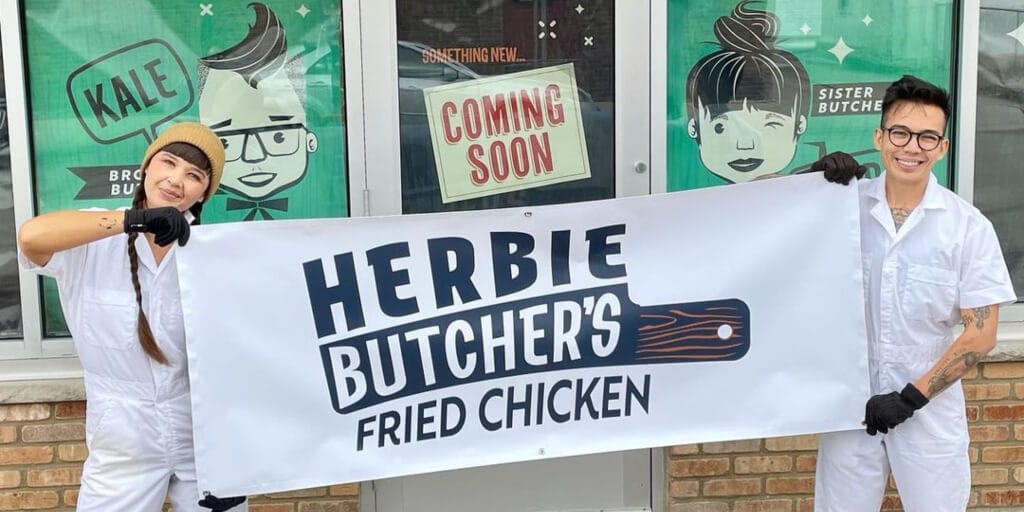 “Our mission has always been to try to save the world by bridging the gap for omnivores that haven’t quite made the full jump to veganism yet.”

Walch siblings behind the Herbivorous Butcher – the first vegan butcher shop in the US – are now gearing up to open their 100% vegan fried chicken shop.

The ‘chicken’ will be made from seitan – a wheat protein that looks, tastes, and feels like the real thing coated in Kale Walch’s secret breading and served as fried chicken pieces or as part of a biscuit sandwich.

The announcement comes after the duo’s phenomenal win against Swiss food giant Nestlé over the trademark of the term “Vegan Butcher”.

While the United States Patent and Trademark Office (USPTO) denied the sibling’s trademark application for the term “Vegan Butcher,” Nestlé nearly succeeded in getting it trademarked for their products, if not for an opposition filed by the siblings.

The food giant eventually backed down, giving up all claims.

Although the Walches do not plan to pursue the trademark so as to leave the term open for everyone to use, they are determined to make vegan foods even better than their meat counterparts and Herbie Butcher’s Fried Chicken is a step in that direction.

‘Bridging the gap for omnivores’

“Our mission has always been to try to save the world by bridging the gap for omnivores that haven’t quite made the full jump to veganism yet,” Co-founder Kale Walch said.

“By making vegan meats and cheeses that are even better than what they were used to, we start to accomplish just that.

“Herbie Butcher’s Fried Chicken continues our brand’s mission by making a fried chicken that won’t leave anyone questioning if a plant-based lifestyle is possible without sacrificing the foods we love.”