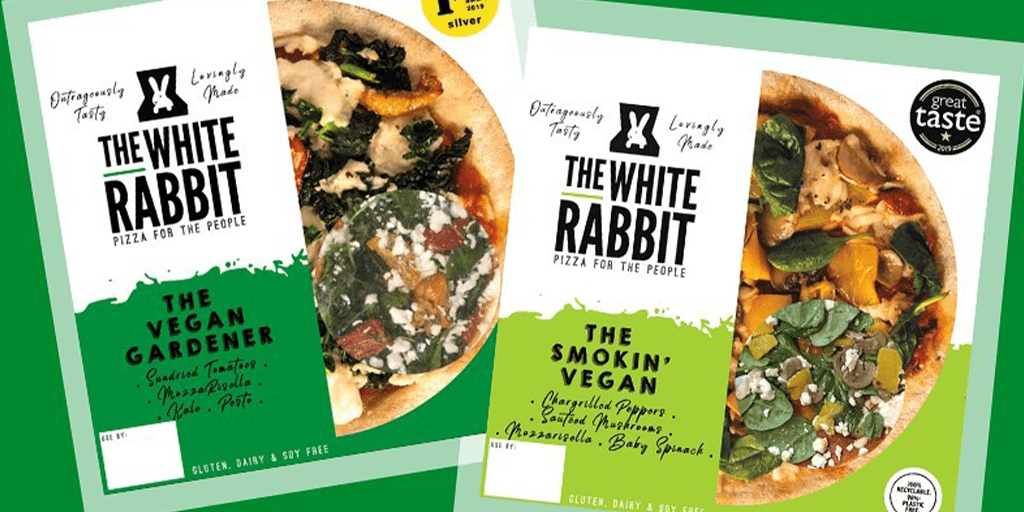 Plant based brand -The White Rabbit Pizza Co has entered the frozen meals category by launching two of its vegan pizzas in the frozen formats.

Makers of the first chilled vegan pizza to hit supermarket shelves back in 2017, The White Rabbit has now launched its gluten-free, plant-based variants- The Smokin Vegan and The Vegan Gardener in frozen formats.

The new frozen vegan pizza range will be sold exclusively at Holland & Barrett stores across the UK.

Nick Croft-Simon and Matteo Ferrari, the duo behind the brand started the company back in 2015 with the aim to produce authentic Italian-style thin and crispy pizzas.

Soon, their pizzas grew in popularity and with increased demands for free-from and vegan versions of the brands existing pizzas, the company decided to create an exclusive range of gluten-free and dairy-free pizza options that are “outrageously tasty in their own right.”

Speaking about the new frozen range, Co-founder of White Rabbit, Croft-Simon, said: “This is an incredibly exciting time for The White Rabbit and our venture into frozen with Holland & Barrett feels like a natural step in our journey, bringing a premium artisan alternative offer to the category, whilst increasing brand penetration.

“It also totally makes sense to offer our consumers options that help to reduce food waste with longer shelf life that doesn’t compromise on quality and taste”.

The company has been rapidly expanding its vegan range. In another announcement, the brand launched its “Rainbow Vegan” pizza.

“Our latest pizza is now available in Ocado! A plant-based kaleidoscope of colours and taste sensations. Roast peppers, courgette and aubergine marinated in a harissa paste, on a bed of baby chard and vegan MozzaRisella,” wrote the group on Instagram.

The rainbow vegan pizza is stocked at Ocado.

White Rabbit’s other vegan alternatives are available in a variety of retailers including Waitrose, Sainsbury’s, Ocado and Whole Foods Market across the UK.

Share this news to let others know of the new frozen vegan pizza range.