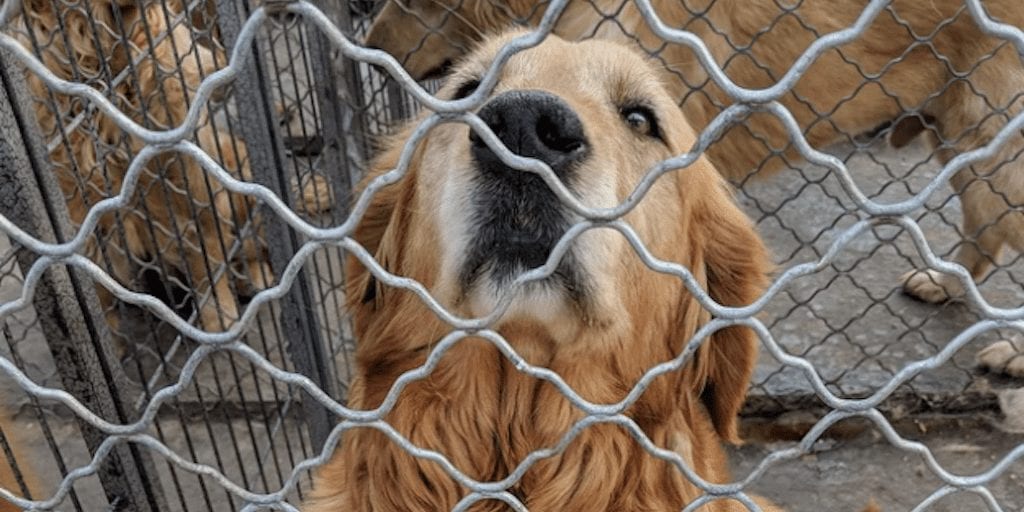 Golden retrievers are one of the most popular dogs for the meat trade in China. Image: RAGOM

An animal rescue charity is dedicated to saving golden retrievers from China’s dog meat trade, and has rescued thousands of animals to date.

Retrieve a Golden of the Midwest saves abused and neglected dogs of all kinds from cruelty, but recently set on a mission to rescue huge numbers of golden retrievers from China.

RAGOM estimates 10 million dogs are killed and consumed each year in China. The majority of dogs in slaughterhouses are stolen pets and retired breeding dogs, as retrievers are not bred for meat.

Dogs are rarely leashed in China and are easily snatched from owners and forced into a waiting car, according to RAGOM. The breed is also one of the meat trade’s most popular.

Volunteers in China fight to save retrievers by approaching butcher shop owners when they discover a dog tied up behind the premises, and plead for the dog’s release.

Other rescuers watch for large trucks filled with stolen dogs en route to the slaughterhouses and do their best to stop them, but it’s such a widespread problem that the volunteers can barely scratch the surface.

Rescuers are inundated with golden retrievers who have been saved from restaurants, meat trucks, and slaughterhouses.

Owner Nicole Stundzia is there to make connections with local rescuers and to bring dogs back to Minnesota.

“When we rescue in China, our contacts have been able to provide safety, shelter, and food for the goldens,” she told People.

“However, it is not uncommon that 20 or more are all housed together during the day. Our partners do the best to provide comfort and makeshift cots so they can lay off the cement floor. At night, they go in a kennel to stay safe from unwanted intruders/kidnappers.”

Many of the dogs arrive in terrible conditions after suffering horrific abuse.

“I was in China in February visiting the rescue facilities. While I was meeting the dogs, I noticed a female dog who looked like she recently had a litter of puppies.

“When I went to pet her, I saw such sadness in her eyes. Every time I walked by her, she would sit so pretty and proud in hopes I would comfort her. I would find her watching me even if I was an aisle away,” Stundzia added.

But RAGOM’s efforts are all worth it once the animals make it out of the meat industry and into the loving arms of workers at the shelter.

“My absolute favorite part is opening the crate door after their long flight, seeing their wiggling bodies, watching their tails wag out of excitement, and coming to me for a hug,” Stundzia said. “They must know we want to give them a second chance with a loving forever home.”

What do you think of RAGOM’s efforts? Share your thoughts in the comments below!