Thousands of animals tortured, decapitated and killed at Nepali festival despite government ban 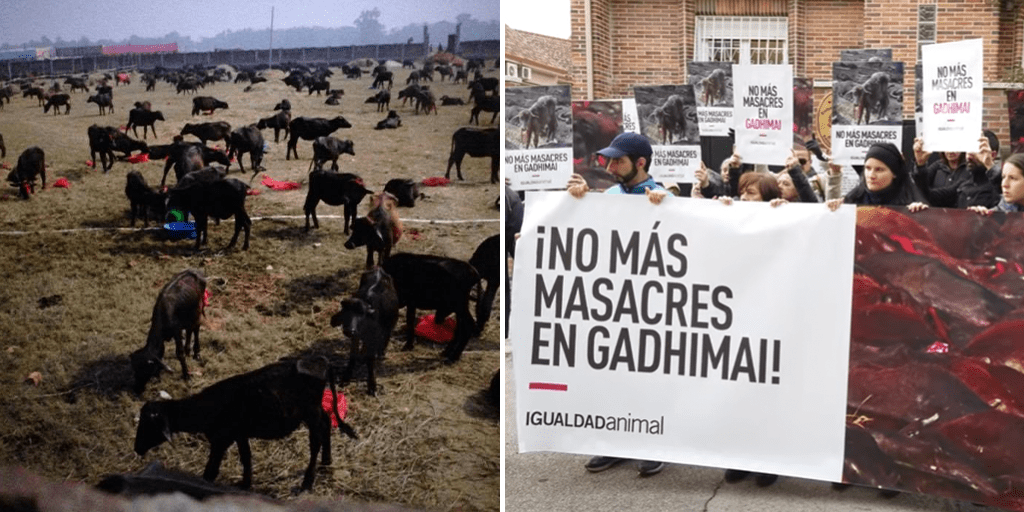 Last year the event, which is held every five years in a remote area of the country, went ahead despite a government ban. And a new investigation has revealed that a second follow-up event saw thousands more animals killed this January.

Welfare group Animal Equality has tirelessly campaigned against the festival for many years and revealed the devastation last year as thousands of buffalo were killed.

Gadhimai Festival features around 200 butchers who enter an area the size of a football field wielding knives and swords. It begins with the ceremonial killing of a goat, rat, chicken, pig and buffalo, before the butchers kill thousands of buffalo.

Despite the government ban thousands are thought to have died this year, though Animal Equality believe it may have led to a 70% reduction in slaughters.

Animal rights groups are furious with officials for failing to implement the ban passed down by Nepal’s high court.

WARNING: The below video contains graphic images which some viewers may find upsetting

“Our investigators documented the horrific killing of conscious goats by devotees, with people shown horrifically decapitating the animals, with dozens of blows needed to complete the brutal killing,” the group said in a statement.

In other violent scenes, pigeons had their wings clipped and were thrown on to the rooftop of the temple to be later slaughtered for their meat.

Animal Equality reported horrific and widespread incidents of abuse at the festival, including:

“It is undisputed that the ritual of animal sacrifice is part of our human history. However, it should definitely not be a part of our present or future. As we evolve, we must discontinue traditions which involve the senseless torture to sentient beings,” said Amruta Ubale, Senior Director of Public Affairs of Animal Equality in India.

A petition calling for the end of the festival has reached 100,000 signatures.

“Animal Equality has been campaigning tirelessly to put a stop to the animal sacrifice at the Gadhimai festival,” the group continued.

“Thanks to the help of our activists, volunteers, and supporters worldwide, we have made great strides to end this cruelty, but the massacre continues and so must our work.

“We strongly believe that we are close to ending the festival’s animal slaughter, and to ensure that happens, we need your help. Please, sign our petition and use your voice to end ritual animal sacrifice at Gadhimai once and for all.”

You can sign the petition calling for the end of the Gadhimai festival here.