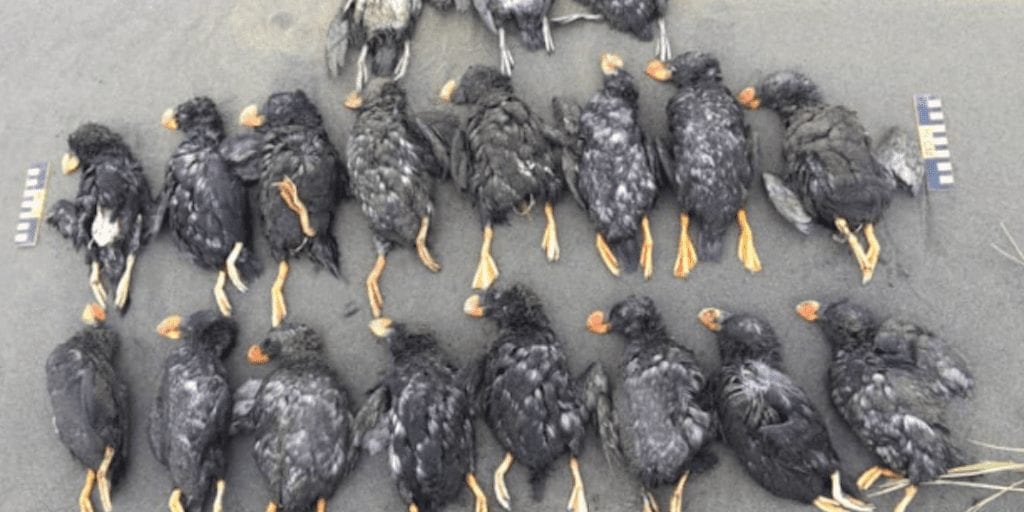 Puffins starved due to the effects of climate change

Hundreds of puffin carcasses have washed up on the shores of Alaska’s St. Paul Island due to the effects of climate change.

Scientists concluded the birds died of starvation, and though only 350 dead birds were found between October 2016 and January 2017, they estimated somewhere between 3,150 and 8,500 may have succumbed.

A report released this week warned that the deaths are part of a bigger problem as climate change wreaks havoc on marine ecosystems.

The journal in PLOS ONE was written by a team of scientists from the University of Washington and the Aleut Community of St. Paul Island Ecosystem Conservation Office.

“Collected specimens were severely emaciated, suggesting starvation as the ultimate cause of mortality,” The University of Washington’s Timothy Jones wrote.

“Whether seabirds are resilient to these changes will ultimately govern their long-term viability in an increasingly variable climate.”

Global warming has reduced the amount of sea ice and caused fewer forage fish, crustaceans and other prey animals in the area.

“There was no fat there, the musculature was literally disintegrating,” co-author Julia Parrish told AFP.

“The puffins are one among several signals recorded that connect the physics of the system — how cold or warm it is — to the biology of the system.

“They just happen to be a very visible, graphic signal because it’s really hard to avoid hundreds or thousands of birds dying and washing up at your feet.”

Most of the dead birds had been moulting, a time in which they are flightless and need more energy than usual – leading to their starvation.