Thousands of sheep die of overheating and smothering on export ships, investigation reveals 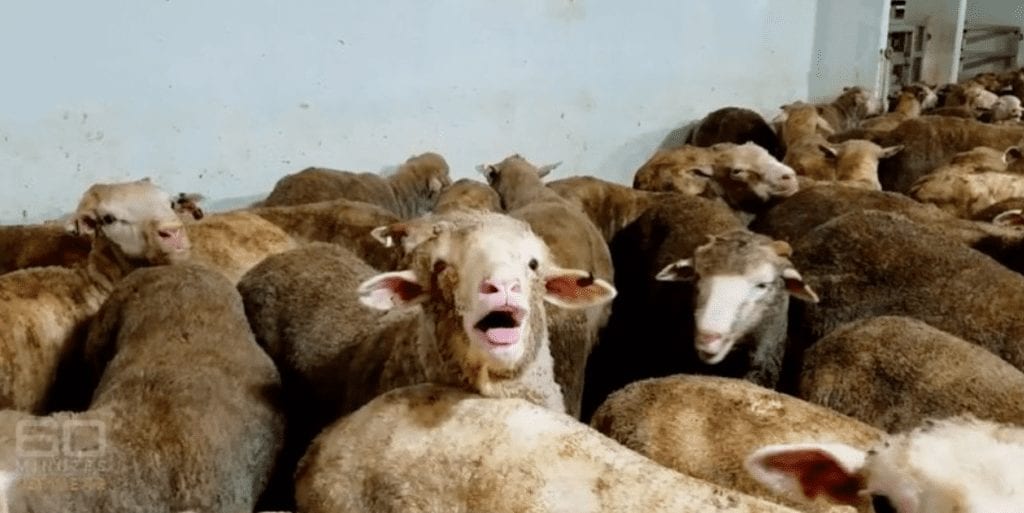 Sheep are exported from Australia by the tens of thousands, and are crammed onto ships during sweltering northern summer months.

Many die from overheating while in pens near oil fuel heaters or from smothering as the animals crowd around air vents for relief.

A new report revealed that 600 sheep died in total on the Kuwait-flagged ship Al Shuwaikh from Australia to the Middle East in May and June last year.

However, despite the shocking conditions and hundreds of deaths, the voyage complied with the Australian standards for the export of livestock.

The report adds to concerns for animal welfare on such voyages, after last year an investigation revealed that 2,400 sheep died on an Emanuel Exports ship from Fremantle to the Middle East in August 2017.

Last year 60 Minutes featured an independent whistle-blower’s footage of the conditions exported sheep are subjected to.

WARNING: The below video depicts scenes which viewers may find distressing

The RSPCA said the latest report was a ‘major indictment’ on the Australian government’s decision to continue trade during northern summer months.

The report criticises the shipping company’s design and management of livestock on-board.

RSPCA senior policy officer Dr Jed Goodfellow said: “This report was in the department’s possession in June 2018 – to withhold its release until after the regulations for this northern summer period were made is very concerning indeed.

“It shows, yet again, that the Department of Agriculture cannot be trusted to effectively regulate live exports and that a truly independent regulator is urgently required.”

The independent observer released a report on the voyages. It explaiend that poor communication between staff ‘resulted in some pens being without water overnight on numerous occasions’.

The report said that some areas inside the ship were hotter than the open decks due to a fuel heater, which it said was turned off as the ship neared the equator.

The sheep were panting – a sign of heat stress – as they were under a steel roof which was painted dark, and therefore was absorbing heat.

Sheep were seen ‘open mouth breathing and attempting to gain position around the ventilation vents on all open and closed decks’ on eight days of the trip.

“In these instances, death by smothering was an observed outcome,” the report added.

What do you think of this investigation? Tell us your thoughts in the comments below!