“I will not be silenced” – Thunberg tells her 30,000 supporters in Bristol climate change rally – Totally Vegan Buzz
Skip to content

“I will not be silenced” – Thunberg tells her 30,000 supporters in Bristol climate change rally 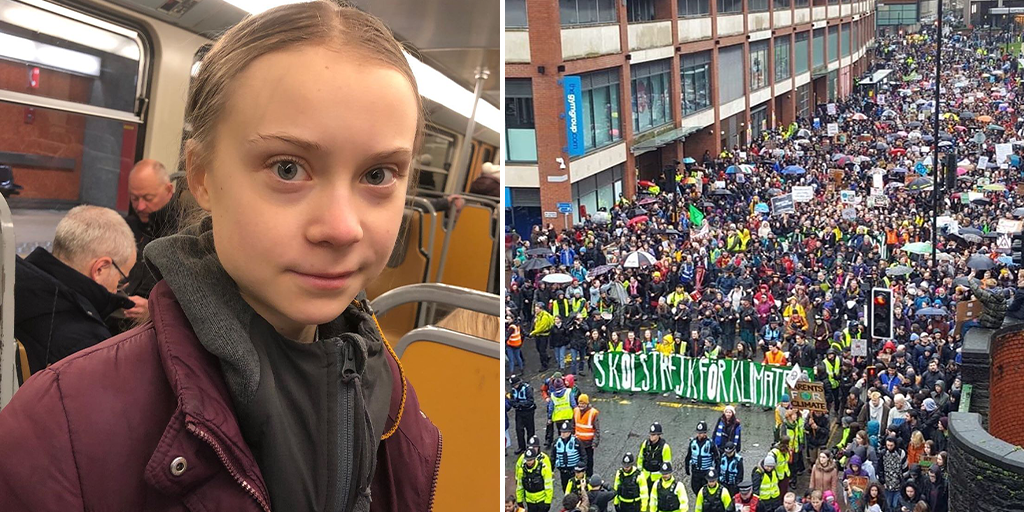 The 17-year-old activist was completely in charge when she declared, “I will not be silenced when the world is on fire,” at the recent Bristol Youth Strike 4 Climate event.

Greta Thunberg attended the 10th Bristol Youth Strike 4 Climate event, where she addressed at least 30,000 attendees, who had gathered to catch a glimpse of their favourite teenage activist.

Thunberg arrived in Bristol by train and was driven to the venue in a red Nissan Leaf electric car.

She said she decided to participate in the event because, “the environmental movement is very strong here”.

Taking center stage amidst chants of “Greta, Greta” from the crowd, she delivered a five-minute speech before flagging off the march.

She started by saying, “There will be a time when we will look back and ask ourselves what we did right now.

“How do we want to be remembered? This is an emergency.

“People are already suffering and dying from the consequences of the climate and environmental emergency.”

‘Emergency is being completely ignored’

She accused the governments and the media for ignoring the intensity of the situation and said: “This emergency is being completely ignored by the politicians, the media and those in power.

“Basically, nothing is being done to halt this crisis despite all the beautiful words and promises by our elected officials.”

She urged the crowd to voice their opinions and continue to pressurize those in charge to act. “I will not stand aside and watch, I will not be silent while the world is on fire. Will you?,” she continued.

She added that the youth had to be the adults as, “World leaders were behaving like children.”

“Once again, they sweep their mess under the rug for us young people, for their children, to clean up for them,” she emphasized.

In her speech, Thunberg said that together people could influence change and every single person counted in the climate movement.

‘We will not back down’

Thunberg cited the Bristol Airport expansion project that was stalled after activists objected to the plan.

“Just look at Bristol as an example. The other week, the plans to expand Bristol Airport were cancelled – a lot thanks to climate activists,” said Thunberg.

“Activism works. So I’m telling you to act.

“We are being betrayed by those in power and they are failing us but we will not back down.”

Ending her speech, she conveyed another scathing message to world leaders saying: “And if you feel threatened by that, then I have some very bad news for you.

“We will not be silenced because we are the change and change is coming whether you like it or not.”

The people in attendance were equally charged and motivated, and braved bad weather to be a part of the protest.

While a sizable population present included young adults, people from all ages and walks of life were present to express their solidarity with the young Swedish climate activist.

Alison Thomson accompanied her 10-year-old daughter, Emily because: “I thought she might be a bit young but she said this would be her only chance to see [Thunberg] speak so I agreed,” said the mother.

“I think it’s really important that people understand what is happening to the Earth,” added Emily.

“This is probably one of the most important things that we should be focusing on right now. Showing support and that you want change will make people higher up realise that as well,” said Annie, a 21-year-old Bristol University student.

The protest was also acknowledged by the mayor of Bristol, Marvin Rees, who tweeted: “ Welcome @GretaThunberg & all the young people who’ve come to #Bristol today.

We’re a city at the forefront of action on climate & social justice & have just launched our Climate Strategy with the urgent action needed to achieve #CarbonNeutrality by 2030.”

We're a city at the forefront of action on climate & social justice & have just launched our Climate Strategy with the urgent action needed to achieve #CarbonNeutrality by 2030: https://t.co/xqFEPuYdPZ pic.twitter.com/Cr16zxIJp2

Share this story if you’re inspired by Greta Thunberg to fight against climate change.