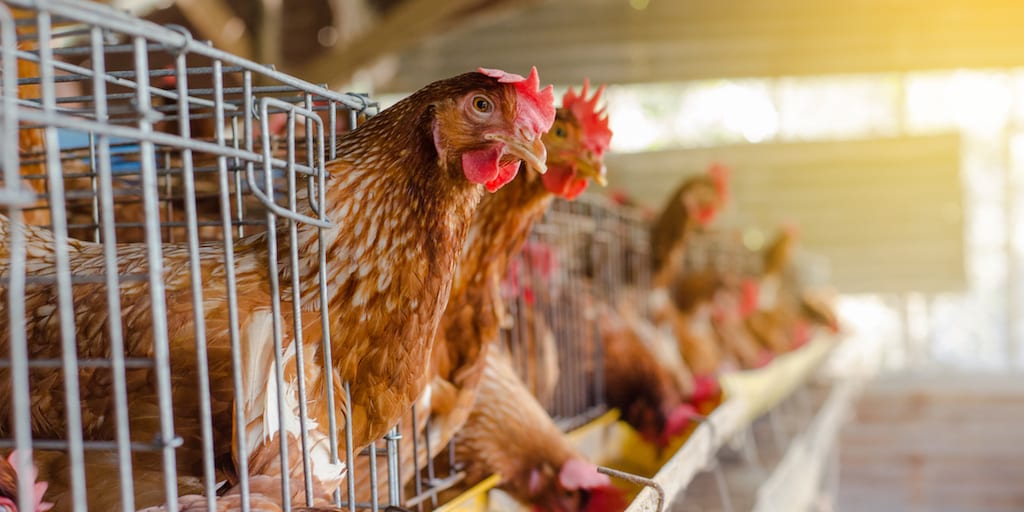 The footage documented by PETA Asia exposes what the charity describes as ‘rampant abuse and horrifying neglect’.

The upcoming Tokyo Olympics is being urged to go vegan after whistleblower footage has revealed ‘hen hell’ on an official supplier’s chicken farm.

The investigators also reported that some hens were left to die a slow painful death after getting trapped under a food trough.

Others had prolapsed reproductive tissue protruding out of their bodies. This condition is usually the consequence of being forced to lay far more eggs than would be natural.

Multiple birds were also filmed cramped into small filthy dark cages with each bird having space less than a letter-size piece of paper.

The lack of space causes unbearable stress and frustration to the distressed chickens that then fight with each other and even resort to self-mutilation.

“The Olympics should not serve the world’s top athletes or anyone else eggs from filthy vendors when vegan protein options that are clean, healthful, and animal-friendly are available.”

Earlier this year, several team USA athletes also called on the Olympic and Paralympic Committee (USOPC) to stop endorsing dairy in their campaigns.

Olympic medalist Dotsie Bausch wrote an open letter to USOPC complaining the board has ‘failed to take seriously the health concerns’ she raised last year.

“In October 2020, a total of nine Team USA athletes, including me, sent you a letter regarding unhealthy cow’s milk’s prominent role in the Team USA culture and advertisements,” the letter states.

“That letter included National Institutes of Health lactose intolerance and malabsorption statistics. Those statistics highlight that up to 95 percent of Blacks, American Indians, Asians, and Hispanics/Latinx are disproportionately affected by lactose intolerance. This puts them at high risk for suffering from painful and debilitating symptoms.

“That letter also included numerous scientific research studies about the deleterious effects of cow’s milk. Instead of considering the statistics and science that we presented, you quickly dismissed it as ‘opinion’. With all due respect, science is a fact, not an opinion.”