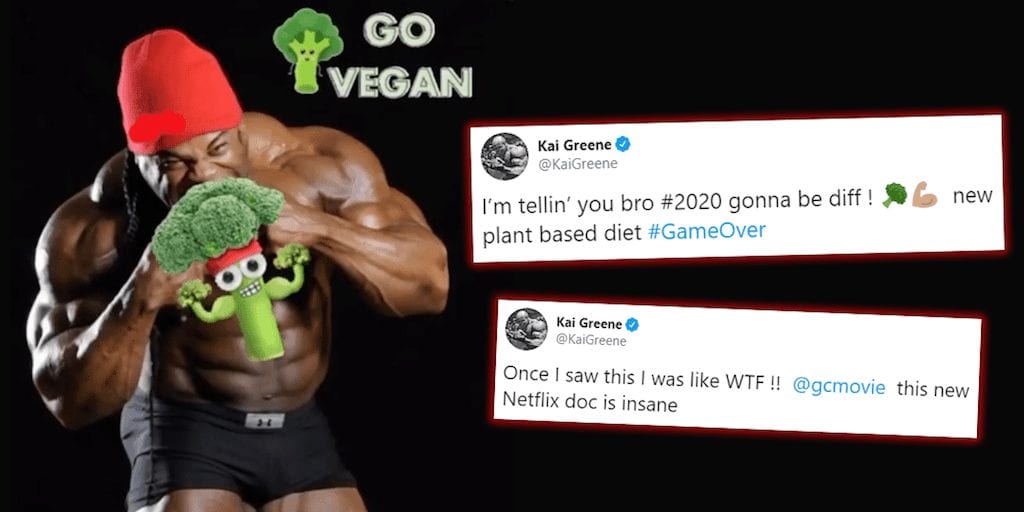 Top bodybuilder Kai Greene has started a seven-day plant-based trial diet after The Game Changers changed his perspective on meat.

The veteran bodybuilder won second place three times at the Mr. Olympia competitions, and is well known in the professional circuit as a personal trainer, artist, and actor.

After watching the hugely popular provegan documentary The Game Changers, which dispels the myth about meat being essential for athletic performance, Greene asked his fans on twitter: “[I am] thinking about going on a plant-based diet [and am] still doing some more research. [Does] anyone here have experiences with it?”

James Wilks, producer and narrator on the film, replied to the comment: “DM me on Instagram, and I can have our science team/sports dietician help with whatever you need. No one has more info on this than our team when it comes to optimizing performance with plant-based nutrition.”

Greene has since decided to give the plant-based diet a try and has been tweeting about his daily activities.

He posted a video of himself in a supermarket with a caption: “NOT in the meat section but still kicking it with the meat lovers. We’re cool, seven-day plant challenge!”

In the next tweet, Greene marked the first day of his plant-based challenge with an image of him flexing his muscles with a broccoli emoji superimposed.

His third tweet had him endorsing his new plant-based diet and warning his competitors that 2020 is going to be different.

In his latest tweet he shared an image of Popeye captioning it:  “Bro you were tellin’ the truth!!! Before they made it about chicken #mindBlown ! Ima hold it down for you man!”

What did you think of The Game Changers? Share your thoughts in the comments section below!