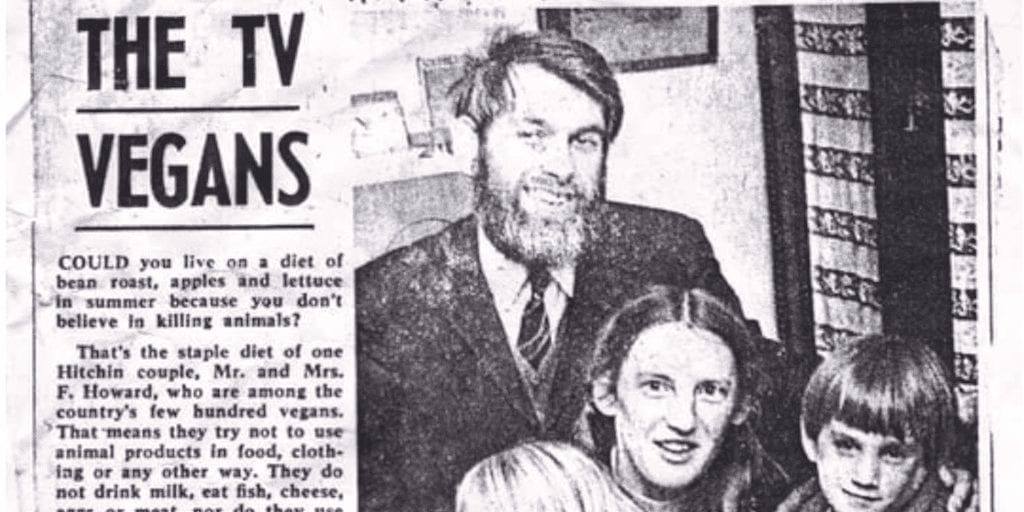 A historic newspaper article about a vegan family has resurfaced, giving a fascinating insight into the life of the ‘few hundred’ UK vegans in the 1960s.

The Howard family from Hitchin, UK lived on a staple diet of bean roast, apples and lettuce. The article explains how the couple didn’t use any animal products, including animal-fat soap, and their clothes were made from synthetics whenever possible.

The father of the family, an engineer by trade, is described as a keen anti-pollutionist and had been a vegan all his life.

The married couple, who met at an international camp for vegans, were motivated to go plant-based by moral issues, health and an leaning towards pacifism.

They lived in a time when most of their food had to be ordered by post, while vegetables out of season are expensive and it was hard to find clothes which didn’t contain wool.

The Howard family thought animal breeding is ‘cruel’ and predicted: “At the rate the world food resources are being used up, the way of life that we lead now may become more common later on.”

Read the full article below.

Could you live on a diet of bean roast, apples and lettuce in summer because you don’t believe in killing animals?

That’s the staple diet of one Hitchin couple, Mr. and Mrs. F. Howard, who are among the country’s few hundred vegans.That means they try not to use animal products in food, clothing or any other way. they do not drink milk, eat fish, cheese, eggs or meat, nor do they use animal-fat soap. As far as possible, all their clothes are made from synthetics.

The couple, who live at 38 Hampden Road, were chosen by the secretary of the Vegan Society to represent the vegan way of life on a BBV TV programme next Saturday – the third and last part of the Philpott File series, “One Man’s Meat”, on BBC2.

Mr. Friedenstern Howard who, as a water resources engineer and a trustee of the national organisation Food-watch, is a keen anti-pollutionist, has been vegan all his life “except for a small relapse at boarding school”. His wife, Mary, was converted about ten years ago, and the couple met on holiday at an international camp for vegans at Chigwell in 1963.

Whereas Mr. Howard is a vegan for moral reasons – “I do not like the idea of killing animals” – Mrs. Howard confesses her motivation is a combination of interest in her own health and leanings towards pacifism.

Their children, Russell (6) and Sophia (4), are also being brought up in the vegan way of life, though, says Mr. Howard, “I do not try to involve them in moral attitudes to using animals at this age.”

Being a vegan creates basic difficulties in running a household which the ordinary person does not encounter. Much of the food, like the 100 percent vegetable artificial meat, has to be ordered by post, and fruit and vegetables out of season are expensive. It’s difficult to get clothes which do not contain any wool, and that whiter-than-white wash has to be abandoned because Mrs. Howard would rather use washing soda than harmful detergents.

The Howards think the breeding of domestic stock is uneconomic and cruel. Said Mrs. Howard: “Once you accept that you do not kill animals then you have to consider what causes an animal to be killed. If you are going to produce eggs you have to feed hens very expensive food. When a cow has had five calves her milk yield is dropping off – she is not paying for the food she is eating.

“Animals do not choose to be born – they are bred by us.”

The Howards also think their life is a bit healthier than the average person’s. “We get the usual infections, but they seem to be very much milder.” And despite the fact that more animal food is being consumed than ever before, they say: “At the rate the world food resources are being used up, the way of life that we lead now may become more common later on.”