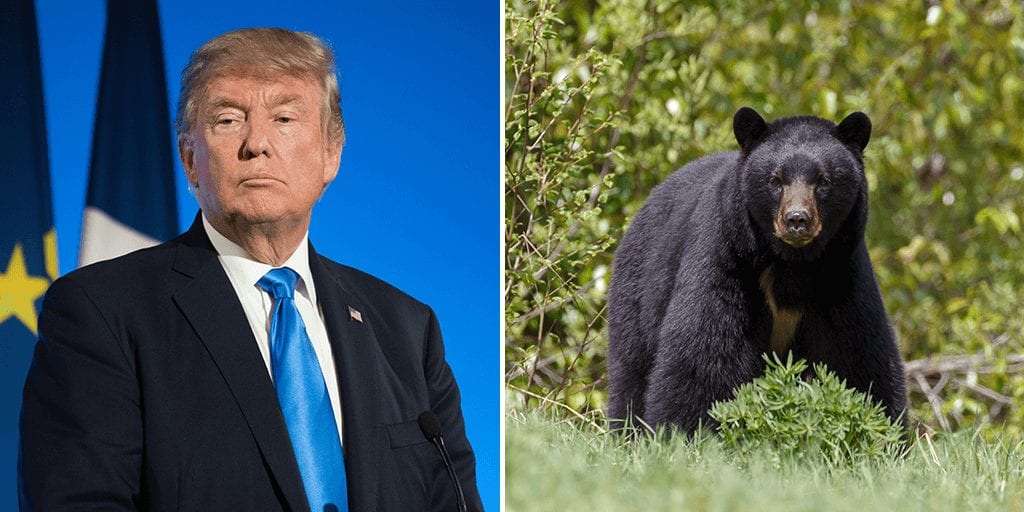 ‘This administration has let down a majority of Americans who would never sanction such cruelty against our native wildlife.’

According to the final rule announced by the National Park Service (NPS) and published in the Federal Register,  last week, the Trump administration lifted the 2015 ban put in place at National Parks in Alaska to safeguard wildlife and its habitat.

This means, hunters in Alaska can legally shoot wolves, coyotes and their pups in their dens, bait black and brown bears with meat scraps and doughnuts and hunt them and their pups with dogs, as well as kill swimming caribou from motorboats, on the 22 million acres of National Preserves from July 9.

The new rule also aims to overturn the one established during the Obama administration, which conferred the power to control hunting in Alaska’s nature preserves to the federal government instead of the state.

Lawmakers and the Alaskan native tribes welcomed the law change, saying it returned the power back to the hands of the state.

Victor Joseph, chief and chairman of the Tanana Chiefs Conference, which represents 42 tribes in the state’s interior region explained: “The previous limitations enacted in 2015 threatened our way of life and our centuries-long sustainable management practices,”

However, conservation and animal rights groups criticized the decision stating that it supported the killing of wild animals and their young in the most inhumane and barbaric manner.

“By opening season on the animals it’s supposed to protect just to appease a few trophy hunters, the agency — and this administration — have not only shown themselves to be extremely poor stewards of our public lands, they have let down a majority of Americans who would never sanction such cruelty against our native wildlife,” wrote president and CEO of Humane Society- Kitty Block and Sara Amundson in a blog post.

“The Trump administration has shockingly reached a new low in its treatment of wildlife,” said Jamie Rappaport Clark, the president and CEO of the Defenders of Wildlife in a statement.

“Allowing the killing of bear cubs and wolf pups in their dens is barbaric and inhumane.”

A spokesperson for the NPS also admitted that the announcement was not entirely well-received.

“I would say the vast majority of people did believe this was a controversial move and were almost entirely opposed to us lifting the ban,” NPS spokesperson Peter Christian told Reuters.

“Shooting hibernating mama and baby bears is not the conservation legacy that our national parks are meant to preserve and no way to treat or manage park wildlife,” National Parks Conservation Association President and CEO Theresa Pierno said in a statement.

What do you think of the Trump administration’s decision to reverse the hunting ban? Share this story to let others know.