Trump to secure a $1 million donation for veterans, if he goes vegan – Totally Vegan Buzz
Skip to content

Trump to secure a $1 million donation for veterans, if he goes vegan 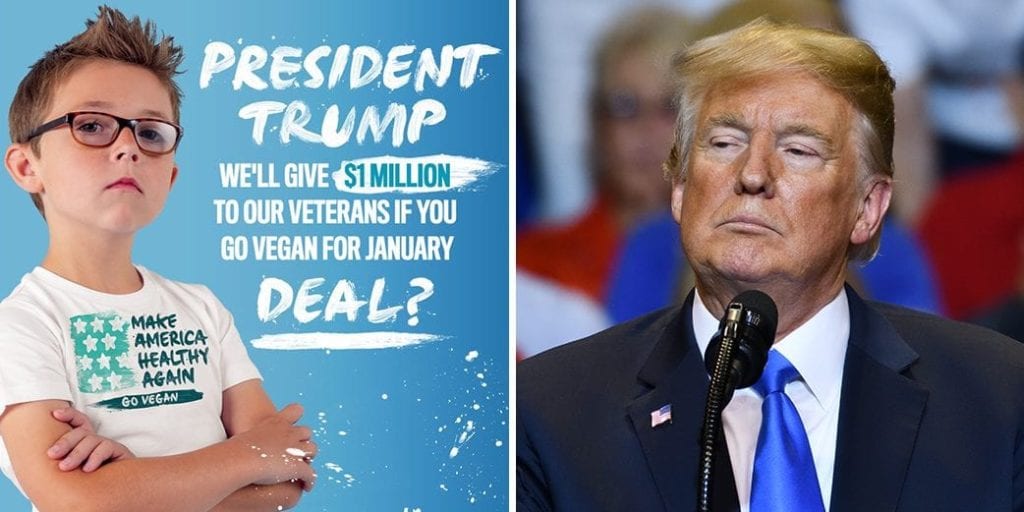 Nine-year-old activist Evan from Melbourne, Fla., has challenged Donald Trump through a letter published in The New York Times in which he writes: “I’d like to make you an offer. We will give $1 million to our amazing veterans if you go vegan for January.

“Now, I know what you’re thinking,” continues Evan in the letter, “Why would I do that?”

“Well, we want to Make America Healthy Again, and a plant-based diet can prevent, treat, and even reverse many serious diseases.”

A press release informed: “The donations for this cause are now in escrow.”

“We really want President Trump to accept our offer. We want to write that check!” states Evan.

The advert has been plastered across billboards, television spots and print media so that Americans too can get motivated to make the switch.

“It’s really not that hard and it can do so much good. Everyone should try it. There is nothing to lose and everything to gain!” adds Evan.

We have a message for you Mr. President, and for America too! Go vegan for January and #MakeAmericaHealthyAgain ???

“Cardiovascular disease and stroke already create more than $329 billion in healthcare costs and lost productivity, while the American Diabetes Association has estimated the total cost to the economy of diagnosed diabetes exceeded $327 billion in 2017 alone,” reads Evan’s letter.

“No wonder so many top healthcare professionals support our campaign.”

Evan, who is the president of the vegan group Animal Hero Kids and ambassador to Million Dollar Vegan told VegNews: “I’ve always wanted to ask the president to go vegan, so when this opportunity came up, I wanted to take the lead. Many people look up to the president and may give vegan a try if he does.

How about this for a winning offer, Mr. President?

“All my life I have been told that the United States of America is one of the greatest countries in the world. I love my country and I want it to be the best … I want to see America lead the way to make us a healthy world where everyone can be healthy and live the life they deserve.”

In a similar campaign earlier this year, 12-year-old Genesis Butler had contacted the Pope offering him a $1 million donation in return for ditching animal products during Lent.

Although the campaign garnered media coverage around the world, a meeting with senior priest Paweł Ptasznik at the Vatican, and the pope’s blessing, the challenge was not accepted.

The president ‘would benefit from this diet change’

Speaking on the benefits of the campaign, renowned cardiologist Dr. Joel Kahn referenced research studies that showed plant-based foods helping improve energy, vitality and vigor and fighting anxiety, depression and other lifestyle diseases such as diabetes and cardiac conditions.

Our challenge, should you choose to accept it Mr. President, would be a HUGE WIN for the health of America.

“The President is under significant daily stress and would benefit from this diet change,” he said. “If he scheduled a visit to my preventive health clinic, I would review his diet, exercise, sleep and stress programs,” added Dr Kahn.

Evan and the vegan charity hope Trump will take on the challenge and “as a token of gratitude are even willing to deliver delicious plant-based versions” to all of Mr. President’s favourite foods at the White House.

What do you think of Evan’s activism? Share your thoughts in the comments below!