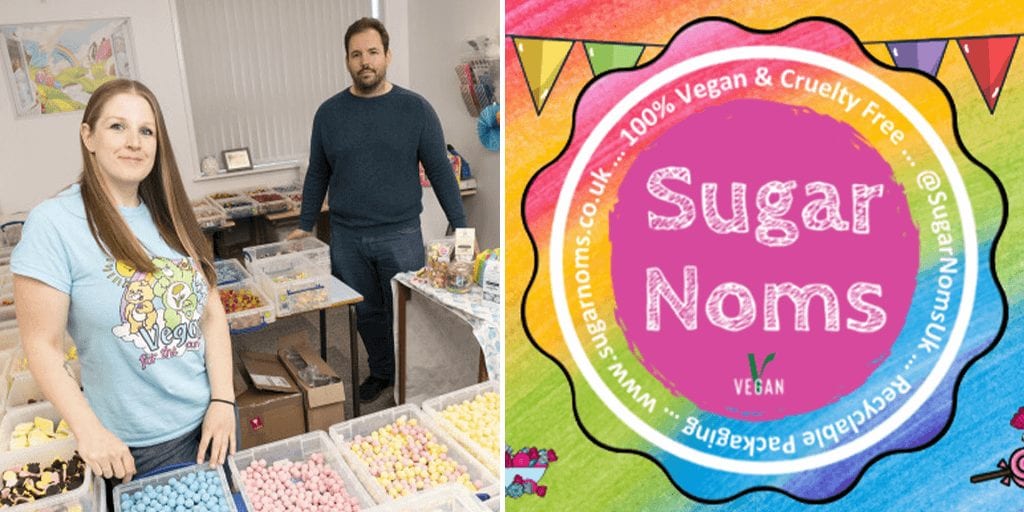 ‘We’re confident Sugar Noms will continue to grow and we plan to expand further outside the UK, create a YouTube channel and become the UK’s leading supplier’

A UK couple has used the pandemic setback as an opportunity to become vegan entrepreneurs.

Founders Kay Tarry and Marc Teasdale launched their vegan candy company Sugar Noms when Teasdale was rendered jobless after being furloughed during the lockdown period.

According to the duo, the idea for Sugar Noms originated from the fact that they always wanted to track down the sweets they used to enjoy as kids but in an animal-free format and really needed a push, which came in the form of Teasdale losing his post as a kitchen designer.

Sugar Noms specializes in more than 100 vegan treats such as fudge, meringues, bon-bons, liquorice, cola bottles and even wonky noms.

Its products are sourced world-wide with fudge being delivered from the Isle of Wight and chocolate from Germany.

According to the vegan founders, all the products are free of dairy, egg, gluten, palm oil, and are clearly labelled for allergens such as nuts and soy.

The packaging is also vegan with 100-percent recyclable tape and stickers.

“Our customers have total assurance that they are buying the best confectionary available for vegans, vegetarians, and allergy sufferers with no risks of cross contamination,” said Teasdale.

“We wanted to supply affordable treats and everything is tested, ingredient-checked and loved by us personally even though it’s a tough job!”

The business has taken off so well that after starting out from home they recently had to shift their operations into UKSE’s Innovation Centre in Redcar, England to accommodate a Candyland office and take on ‘extra space to organise Covid-safe collections and tasters.’

“We were delighted when we could move into UKSE’s Innovation Centre in Redcar,” Teasdale quipped.

“All the facilities, especially the 24-hour access as we can be packing orders until midnight, are ideal and the UKSE team has been so supportive and friendly.”

“It’s been a pleasure to help Sugar Noms settle in at the Innovation Centre during such a challenging time for businesses and to see them do so well,” UKSE’s Diane Parker added.

“We have also been very happy to help out with any testing requests!”

The future looks extremely bright for Sugar Noms and Tarry and Teasdale aim to become UK’s leading vegan sweets supplier with business expansion goals outside the region, exploration of new avenues and inclusion of more variety to their products.

Co-founder Tarry said: “We have a strong following on Teesside alone and one of our biggest fans is my Nan who is dairy intolerant and owned her own traditional sweet shop in the 1960s.”

“We’re confident Sugar Noms will continue to grow and future ideas, some of them from customers, include sugar-free options and tailored wedding boxes.

“We plan to expand further outside the UK, create a YouTube channel and become the UK’s leading supplier.”