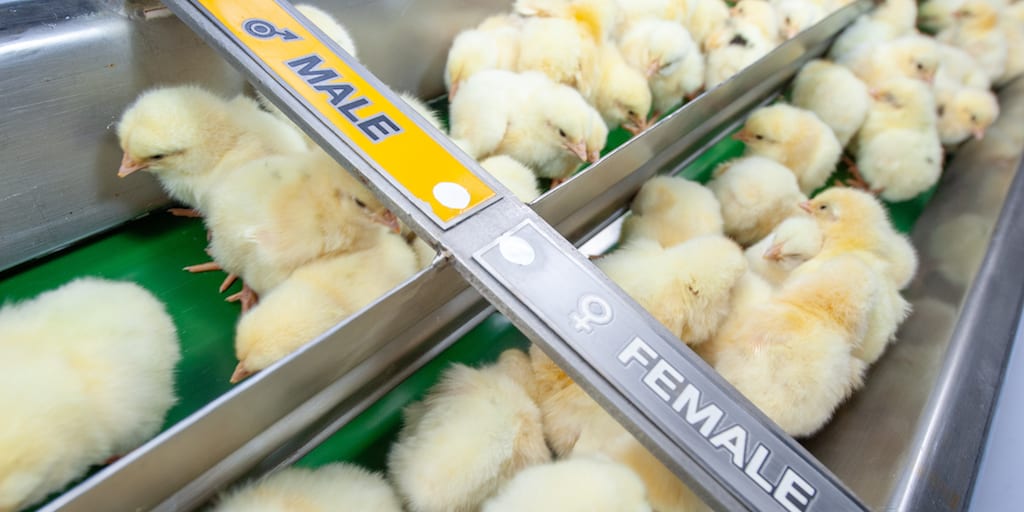 Around 29 million male chicks are slaughtered each year in the UK.

According to UK farmers and breeding companies, supermarkets are stalling measures that can end the culling of male chicks in the egg industry, The Guardian reports.

It is common practice to kill male chicks shortly after birth worldwide since they are widely regarded as by-products in the egg industry. This is because they cannot lay eggs or be fattened up quickly enough to be sold for meat.

Nearly  330 million unwanted birds are culled by maceration (shredding), cervical dislocation (the breaking of the neck) or gassing each year in Europe.  In the UK around 29 million chicks are slaughtered each year.

However, farmers can avoid the mass culling through breeding technology already in use in France and Germany.

The two EU countries are among the first in the world to outlaw the controversial practice.

Italy has also announced that it will ban the “culling” of male chicks sparing the lives of around 25 to 40 million young birds every year.

Gender testing in Germany and France

Male chicks are separated from females on the very first day after birth through sex identification. However, German company Respeggt, has developed an in-ovo gender testing technique, which can identify and prevent the hatching of male chicks.

The patented process uses a laser to make a tiny hole and extract fluid from a fertilised egg on its ninth day of incubation. The liquid is then analysed to determine the sex of the chicken before it is born.

The French government has allocated €10m (£8.65m) to gender testing machines for commercial hatcheries. It has also called for a fairer distribution of costs across the supply chain.

The UK has no legislation to avoid male chick slaughter.  Moreover, retailers are against supply chain improvements, because the process will create consumer awareness about how much suffering is prevalent in the egg industry.

Carmen Uphoff, Respeggt’s chief operating officer, told The Guardian: “We are trying to enter the UK, but have so far been unsuccessful.

“We are trying to talk to everyone, but the trouble with the UK is people are not aware [of where eggs come from]. We are trying to adopt different strategies and enter in a small way to learn how the UK works.”

Uphoff added: “I have suggested starting with just one brand that is ‘free of chick culling’ on the shelves but, again, the response is that the customer will realise all the other eggs are ‘with chick culling’, and they wouldn’t have known that before.”

Meanwhile, the British Retail Consortium said it will continue to consider all research which could further improve the welfare of laying hens and uphold the high standards currently in place.

Share this story: UK not ready to follow France and Germany in ending the slaughter of day-old male chicks.