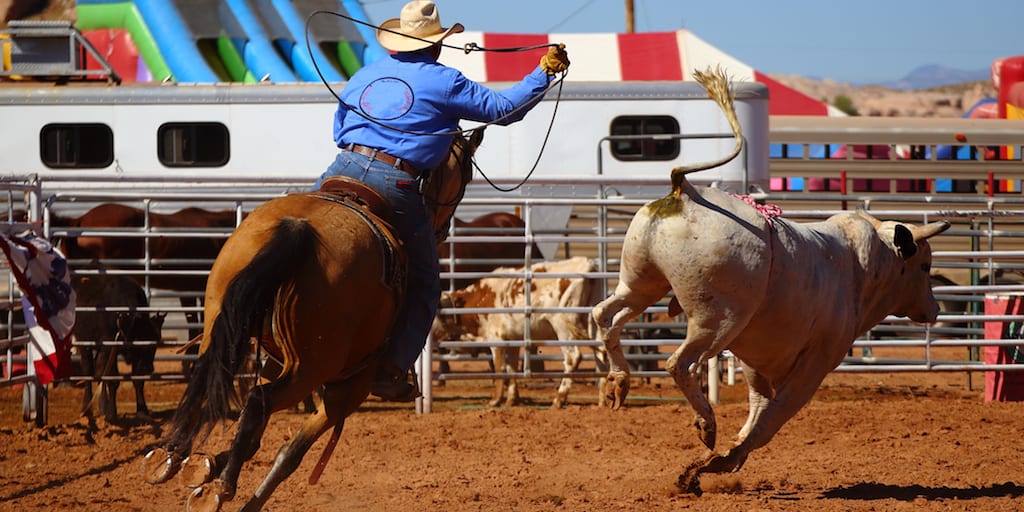 Animal campaigners are urging UK shoppers to stop buying New Zealand wool, meat and dairy because that “helps fund extreme violence towards animals by some of the country’s farmers”.

The plea comes as the rodeo season begins in which calves, bulls and horses are subjected to traumatizing abuse in the name of entertainment and bringing rural communities together.

“Consumers have long been told the country’s animal-welfare standards are among the best in the world but behind the scenes some farmers are busy brutalising animals,” Anti Rodeo Action NZ said.

“Top UK supermarkets and other retailers say animal welfare is important to them, but they are complicit in facilitating violence by purchasing New Zealand wool, meat and dairy from our farmers.

“None of our major exporters uses images from rodeo to showcase our animal welfare standards to the world.”

In footage obtained by the The Independent, cowboys are seen electrocuting, punching, boxing, and smashing animals’ faces to the ground.

While filming of such events is banned, Rodeo Action NZ group’s secret footage shows cowboys electrocuting animals to restrain them, throttling calves using ropes so they are sent flying through the air, making horses drag calves by neck ropes that choke them, pulling animals’ ears and tail twisting, and slamming calves on their backs or sides.

Animal campaigners, who have documented rodeo events for seven years said cattle and horses are often zapped with electric “hot shots” to force them out of the chute, calves’ necks are twisted as they’re brutally slammed onto the ground, and horses are cruelly spurred into bucking.

“Bulls are ridden and spurred in the flank; they are wrapped with an extremely tight rope. Excessive saliva pours from their open mouths. Some cry out,” said Lynn Charlton of the Anti Rodeo Action NZ group.

She added that horses are made to drag calves along the ground by their necks, making them choke. “Their necks elongate frighteningly. Some get their heads trapped beneath their necks, preventing breathing while inhaling dust and dirt. Some defecate in fear.”

The group also noted that rodeos cause internal damage, particularly in the rope-and-tie and steer-wrestling events.

While the New Zealand Rodeo Cowboys’ Association (NZRCA) insists that investigations have found no lasting effects for the animals and vets oversee animal health at all the roughly 35 rodeos a year, activists and many Kiwis are actively seeking a ban.

Will Appelbe, a spokesperson for New Zealand’s leading animal rights organisation, SAFE, said most Kiwis are appalled by the blatant violence depicted at such events.

“Every year, young calves, bulls and horses are abused and killed by so-called ‘cowboys,’” he.

“We’re a nation of animal lovers. It’s not surprising then that a 2016 Horizon Research poll showed that the majority of Kiwis supported a ban on rodeo.”

The Direct Animal Action group also handed over a petition to Auckland Council’s Rodney Local Board, calling on them to stop leasing the Warkworth Showgrounds to the Warkworth Rodeo and urged the council to no longer host rodeo on any council land, parks and reserves under their management.