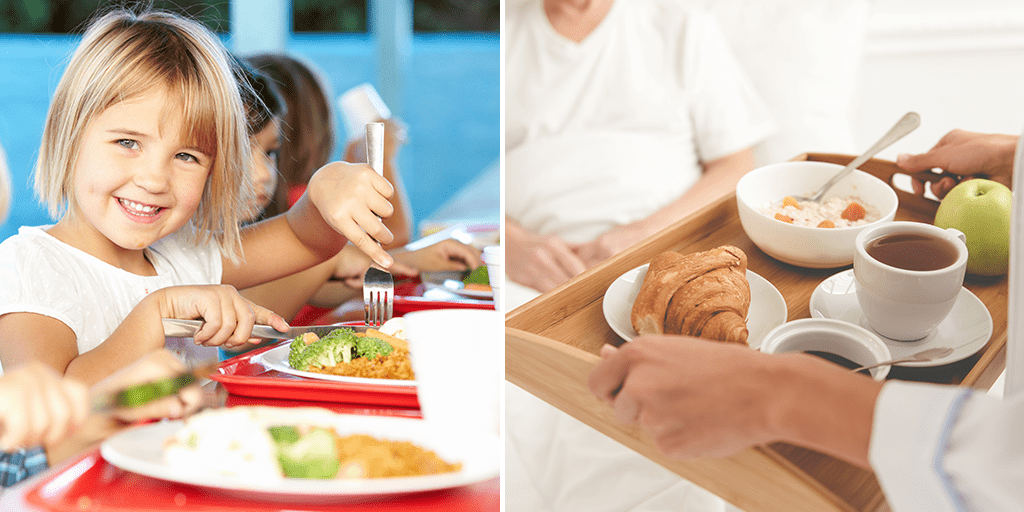 ‘We are delighted at such a strong commitment to reduce the food industry’s impact on the environment, human health, and animals.’

As part of a ‘#20percentlessmeat’ campaign, schools, hospitals, universities, and care homes across the United Kingdom will serve up to 20 percent less meat in an effort to stem the UK’s environmental footprint and improve public health.

The campaign has been launched by Public Sector Catering 100 (PSC 100)—a collective of public sector caterers in collaboration with Humane Society International UK.

Achieving the target will save approximately 200,000 metric tons of carbon emissions – the same environmental effect as removing more than 400,000 cars from the road for a year or equivalent to the annual carbon footprint of 32,000 people or a town the size of Whitstable in Kent.

The caterer association feeds more than a quarter of the UK’s population and the 20% cut would remove 9 million kilograms worth of meat from plates – equivalent to saving 45,000 cows or 16m chickens annually.

“The huge range of people we feed every day means we can influence the diet of the nation. I, for one, don’t want to be known as part of the generation that could have acted, even in a small way, but did nothing,” said Andy Jones, chair of the PSC100 group of caterers and suppliers.

“We are delighted at such a strong commitment to reduce the food industry’s impact on the environment, human health, and animals. The boom in plant-centric cuisine in restaurants and supermarkets has been no secret in recent years, so the PSC100 Group’s decision is timely, bringing public sector catering into alignment with consumer demand,” said HSI UK Executive Director Claire Bass.

“The environment and climate benefits of consuming less animal products couldn’t be clearer. A 20-percent meat reduction across schools, hospitals, care homes, universities, and other UK institutions will also help improve human health, reducing burden on the National Health Service, as well as saving millions of animals from suffering on factory farms every year.”

The pledge aligns with recommendations released by the Committee on Climate Change (CCC)- government’s official advisers, who say a 20 per cent cut in beef, lamb and dairy from UK diets is necessary for the country to hit its net zero target.

According to the CCC, a 20% meat reduction along with 20% cut in food waste comprises one of five action points on changing land use.

Lord Deben, chairman of the committee said: “In 2017, land use – including agriculture, forestry and peatland – accounted for 12% of total UK greenhouse gas emissions.”

“The carbon emissions savings and the potential benefit to people’s health can play a part in tackling climate change and shortening NHS queues,” added Jones.

According to Stephen Forster, chairman of the Local Authority Caterers Association: “The school food industry is leading the way on meat reduction. Schools across the country have meat-free days and are increasingly introducing plant-based options.”

Several UK schools and universities have implemented steps to reduce meat for health and the planet.

In February, the London School of Economics (LSE) become the third UK university to ban beef in a bid to offset the institution’s impact on the climate.

Last year, London’s Goldsmiths University stopped selling beef  in all cafes and shops on campus while students of the  University of East Anglia (UEA) also debated on banning the sale of beef on campus for the environment.

Share this news to reveal the impact of the meat industry on public health and the environment.