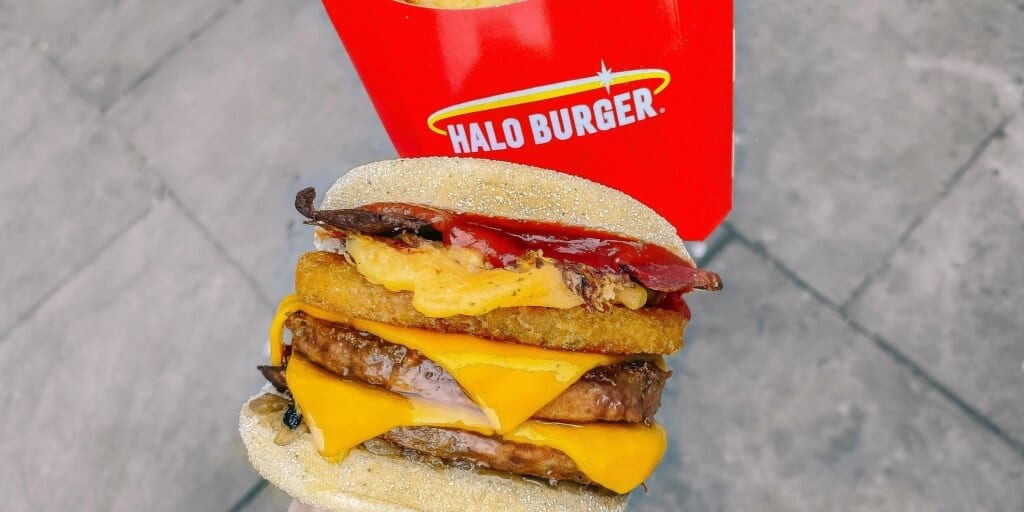 Halo Burger’s limited-time breakfast sandwich stuffed with vegan bacon,  sausage, and egg is said to be the first of its kind 100% plant-based ‘MockMuffin’.

Fancy a vegan take on McDonald’s classic breakfast muffin this Veganuary. Well, your prayers have been answered.

According to the fast-food chain, the vegan McMuffin is all set to fool carnivores with its amazingly real meat-like taste.

Founder of Halo Burger, Ross Forder, said: “We are super excited to launch this first of its kind 100% plant-based ‘MockMuffin’.

“This take on a nostalgic classic tastes just like the real deal and will help any Veganuary virgin smash the rest of their meat-free month.”

Andy Shovel, Co-Founder of THIS, added: “The team at Halo Burger are legends – the Ultimate Mockmuffin featuring THIS Isn’t Bacon looks so good it’s basically NSFW.” (Not Safe For Work).

The £11.50  limited-edition breakfast sandwich is available from today for takeaway at Shoreditch, Brixton, and Brighton Halo Burger branches. It will also be available on @deliveroo and @ubereats_uk until 31st  January.

This isn’t the first time Halo Burger has collaborated with plant-based meat brand THIS.

In 2019, Halo Burger added meat-free nuggets from THIS with the founder acknowledging that “the movement towards meat-free isn’t going anywhere”.

Share this story to let others know about Halo Burger’s limited- edition ‘Mockmuffin’.