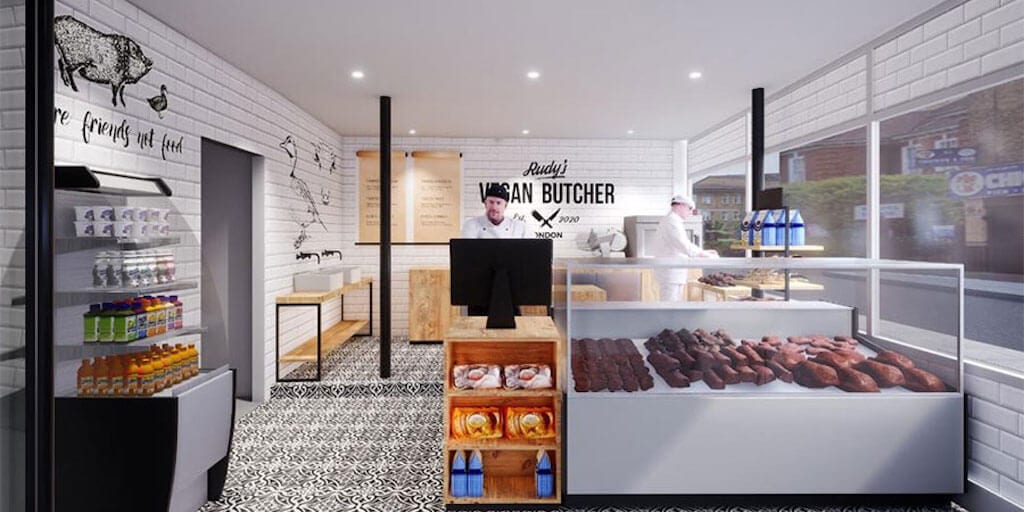 The butcher, on Islington Park Street, London, will be open to the public from 1st November – which is celebrated as World Vegan Day.

Rudy’s Vegan Butcher, situated on the corner of Islington Park Street, will open its doors to customers on World Vegan Day, 1st November.

The store, which looks just like a traditional butcher, will sell vegan versions of bacon, chicken, and turkey made from soya and seitan.

According to Rudy’s, customers can choose from an array of foods, including homemade pastrami, dirty burger patties, cheeze sauce, and chilli-non-carne, as well as a rack of jack, lobstah salad, meatballs, chick’n lover pate, and shredded BBQ pulled porc.

As if the above vegan varieties weren’t enough, Rudy’s will also have a new charcuterie section – with vegan smoked ham, salami de provence, pepperoni, and their famed homemade pastrami.

A vegan Christmas roast turk’y will also be up for grabs just in time for the festive season!

To celebrate the milestone, Rudy’s will be giving 100 pounds of free baycon to the first 200 customers entering the store on 1st November.

Rudy’s vegan butcher meats will also be available to buy online from the start of November, so that customers living outside of London can enjoy the entire range of vegan meats.

Not only will the butcher deliver nationwide, all orders made on World Vegan Day will also receive a free pack of baycon.

‘Cannot wait for this’

Rudy’s announcement has been met with a lot of excitement and people have been leaving a slew of positive comments.

“YES! When next in London, you’ve got a customer! May you have such success and be met with increasing demand, that you expand not only all over across the UK but export to other countries!,” wrote one Instagram user

“This is what the world needs,” added a third.

Share this story to let others know about the UK’s first 100% vegan butcher shop in London.