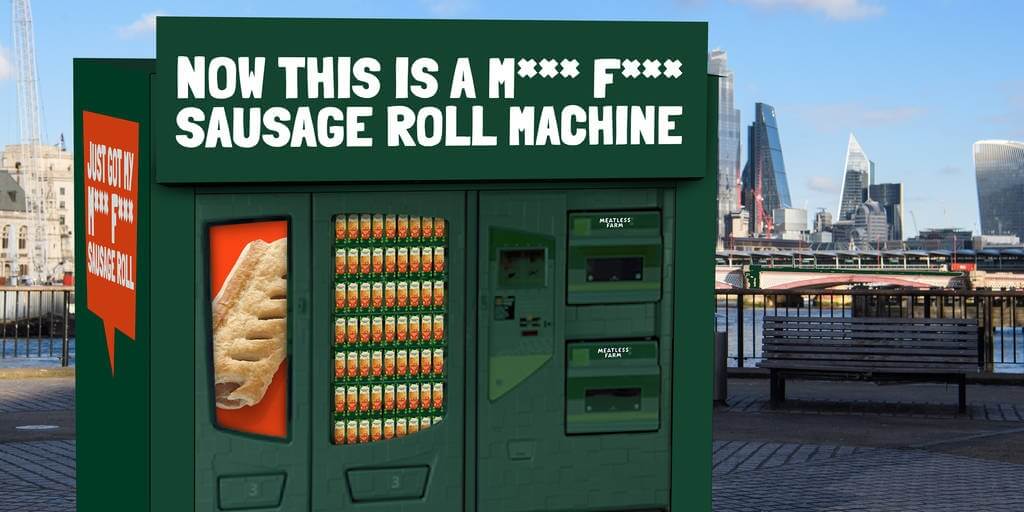 The Meatless Farm’s first vending machine in London will dispense free sausages roll on the 5th of June from 11.30 am to 7 pm.

Meatless Farm has announced it will be distributing free vegan sausages to celebrate National Sausage Roll Day next month.

The move comes after the plant-based brand revealed plans to roll out ‘smart’ sausage roll vending machines across the UK.

According to Meatless Farm, the first set of machines will be installed in London, Bristol, Leeds, and Nottingham.

The first one is making its debut in the South Bank area of London and to celebrate the milestone, Meatless Farm will be offering hot or cold sausage rolls absolutely free.

The vegan sausage rolls will be dispensed at Observation Point, 56 Upper Ground, South Bank from 11.30 am to 7 pm on Saturday (5th June).

According to Meatless Farm, the sausage rolls have a herby sausage filling that is made using pea protein to create a texture and taste similar to its meat counterparts.

The brand added: “Each sausage roll has a perfectly crisp and flaky puff pastry which will have even the die-hard sausage roll fans jumping for joy”.

Morten Toft Bech, Founder of Meatless Farm said: “Our new vending machines will give sausage roll fans the opportunity to indulge and get their well-deserved fix, whilst doing their bit for the planet. Let the good times sausage roll!”

Rosemary Hogg, Chairperson of The British Sausage Roll Association added: “I was overwhelmed with excitement when I heard the news, I have never seen anything as clever as this before. Sausage rolls have been passed through the generations and now everyone can take a bite out of Meatless Farm’s meat-free masterpiece.”

Apart from launching the first vegan sausage vending machine in the UK, Meatless Farm recently partnered with restaurant chain Nathan’s Famous to launch its first-ever vegan hot dog in the US.

James Walker, the Senior Vice President at Nathan’s Famous Restaurants, said: “As plant-based menu items continue to grow in popularity, we are excited to launch the first ever gourmet, plant-based hot dog, a product created not just for our flexitarian, vegetarian, and vegan customers, but all who enjoy a healthier diet.

“We are looking forward to growing a new customer base with this partnership with Meatless Farm and know their high-quality ingredients are the way to deliver what our customers have come to expect of the original Nathan’s Famous hot dog.”