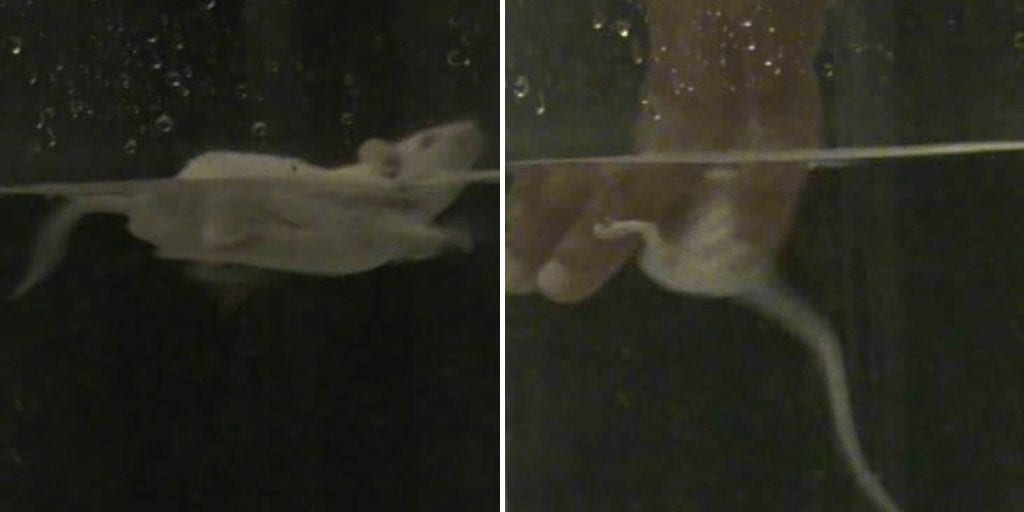 According to the University’s Animal Welfare and Ethical Review Body “no ethical or welfare reasons” exist to stop the tests.

The University of Bath has come under fire for advocating cruel and worthless forced swim test experiments.

According to the People for the Ethical Treatment of Animals (PETA), which obtained video footage of the tests through a Freedom of Information (FoI) request to the university, the mice are placed in an inescapable sheer-sided beaker of water and forced to swim.

Researchers claim the test can measure an animal’s ‘depression-like behaviour’ and be potentially used to test the effect of antidepressant drugs, intended for humans.

Research claims the drugs help in alleviating the rodents’ despair and improving their swimming time.

However, the charity states the “theory has been debunked.”

In fact, “PETA scientists reviewed published studies and found that dropping animals into water this way was less predictive than a coin toss of a compound’s effectiveness in treating human depression.

“Animals used in these tests frantically try to escape by attempting to climb up the sides of the beakers or even diving underwater in search of an exit. They paddle furiously, desperately trying to keep their heads above water. Eventually, most start to float.”

“Forcing animals to swim frantically in fear for their lives is hideously cruel and tells us nothing about human depression,” Dr. Emily Trunnell, a neuroscientist at PETA, said in an earlier statement.

Dr Julia Baines, PETA’s science policy manager, said: “Repeatedly subjecting mice to a near-drowning experience teaches us nothing about the complexities of human depression and doesn’t tell us what antidepressants will be effective in humans.”

PETA added that several institutions including King’s College London and the University of Adelaide announced it would no longer subject animals to the cruel test after PETA presented scientific evidence showing the failings of the forced swim test.

‘No ethical or welfare reasons’ to stop the tests

However, despite raising concerns about the subjective and invalid model of human depression, the University of Bath’s Animal Welfare and Ethical Review Body said, it saw “no ethical or welfare reasons” to stop the tests. It added that the swim test is “pharmacologically validated and well-established”.

A representative for the University said: “Research shows that all classes of antidepressant treatments increase swimming time in the forced swim test, and therefore this test forms part of evidence gathering to assess the potential of new antidepressant drugs – which are urgently needed.

“Unfortunately, there are currently no ‘in vitro’ (non-animal) methods of checking whether a potential new treatment is likely to have antidepressant effects.

“The mice are gently placed in a beaker of warmed water for six minutes.

“At the end of the test the mice are removed, gently dried and warmed.”

You can join PETA in urging the University of Bath to ban the near-drowning of animals here.