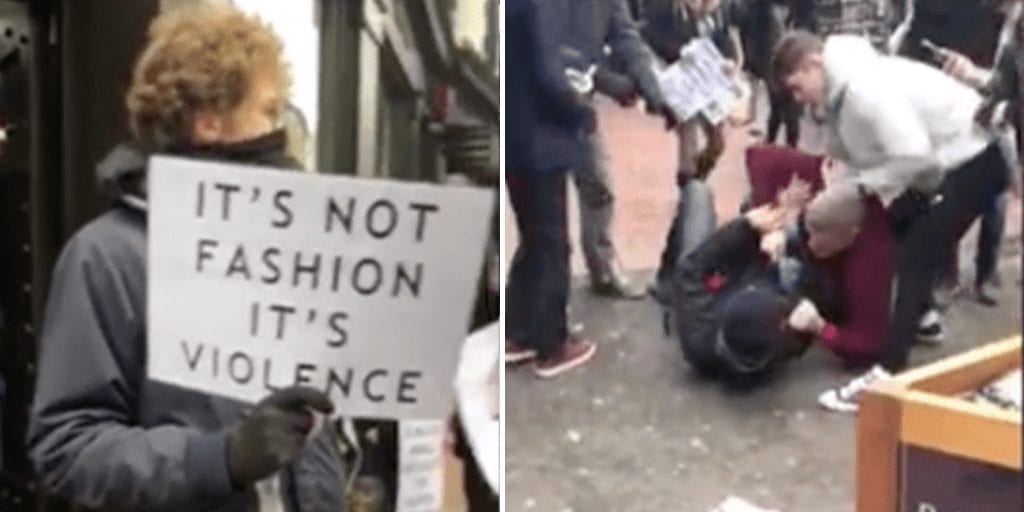 A shocking video footage has captured a Brighton vegan activist being assaulted for protesting outside a shop that sells fur.

Martin Shaw, 30, participating in his third protest was stationed outside Profile Fashion-a shop that sells fur products along with other Brighton Vegan Activists

The group had gathered at Duke Street, Brighton to protest against the store and stood holding placards reading “It’s Not Fashion, It’s Violence”, “More Than 50 Million Animals Are Killed For Fashion Every Year” and “Wear Your Own Skin”.

During the protest, an unprovoked man lunged at Shaw and started assaulting him. The irate man headbutted and pushed him to the floor and continued to trash the activist till other members pried him off Shaw.

Shaw ended up with cuts on his face and a bloody nose.

Shaw claimed the attacker was against his veganism and anti-fur beliefs. The Metro reported Shaw stating: “Out of nowhere he headbutted me. He pulled me to the floor. A member of the public thankfully managed to pull him off me.

“It just shows that with the people who buy fur, they can be violent towards humans as well as animals.”

The scuffle seemed to arise because protestors had blocked the exit of the shop, a claim the activist group denied.

An activist who wished to remain anonymous said: “It’s so upsetting that a non-violent protest against the harming and use of animals is met with such a violent response.

“The customer had plenty of space to walk around the activist.

“All we were trying to do is raise awareness about the selling of animal skin in our city, not target any individuals.”

The Sussex police were contacted twice to report a ‘noisy demonstration’ and “that a fight had started, but split up less than a minute later”.

However, Shaw, a vegan for four years, said he didn’t want to press charges and would continue to protest against the store and animal cruelty.

He added: “We can see that all animals feel suffering and pain and we have a duty to stop that where we can.

“Nothing justifies wearing the skin of an animal. It causes so much pain and suffering to the animal.

“They’re trapped in snares and they’re electrocuted for their pelts. If anything, it has inspired everyone to keep protesting in order to make sure this shop stops selling fur.”

Have you ever been attacked for your beliefs? Share your stories in the comments below!