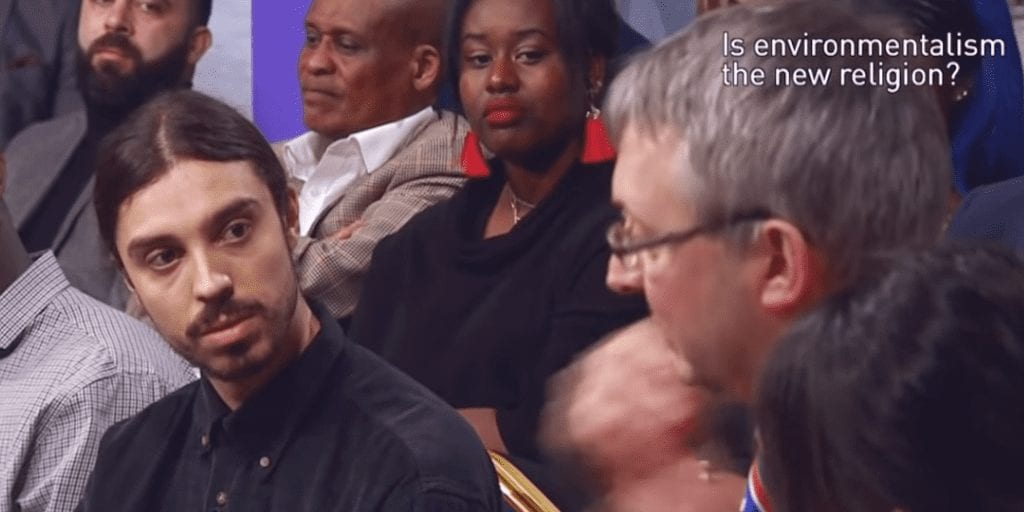 Vegan activist Earthling Ed was in typically inspiring form when he was pitted against a butcher on a live BBC debate last night (February 2).

The animal rights campaigner featured on BBC One’s The Big Questions as the show asked ‘Is environmentalism the new religion?’.

Presenter Nicky Campbell introduced Earthing Ed and a butcher, who were sat beside each other, and applauded the pair as they shook hands.

But the chummy encounter took a more serious tone as Campbell asked the butcher: “Do you feel demonised as a butcher, because you have high welfare standards don’t you?”

“I think all of the production systems get lumped together,” the butcher argued.

“I feel that I can offer my customers the traceability, the welfare and also how those animals are looked after and fed.”

Unsurprisingly this was not enough to reassure the activist, who asked: “Can you tell me how they are killed in the abattoir?”

The butcher explained the animals are knocked unconscious and electrocuted.

Phrases such as ‘humane’ and ‘high welfare’ by the meat industry have been regularly targeted by activists for being misleading.

Earthling Ed continued: “It’s a fact that we don’t need to eat these products so to take the life of an animal can never be high welfare or moral.

“There’s a documentary called Land of Hope and Glory online which talks all about what happens to animals in the UK.”

The activist then referenced a study by the University of Oxford which recommended making the switch to a vegan diet.

But the butcher interrupted, asking if the study was conducted by a vegan.

“He wasn’t vegan when he started but he was by the time he finished,” Ed continued.

“He found that 83% of the farmland that we currently use is dedicated to animal agriculture and if the world shifted to a plant-based diet we would reduce the amount of land we needed for agriculture by 75%.

“He summarised by saying that the best thing we can do for our planet is to live a vegan lifestyle.”

The activist went on to discuss a comprehensive study about food and the environment.

“It said in the UK we have to reduce our beef, our lamb and our pig consumption by 90% and our dairy and poultry and egg consumption by 60% to not hit that 1.5 degree threshold rise in 12 years time,” Ed explained.

“The studies are out there, the information is out there, we have to listen.”

What do you think of this debate? Tell us in the comments section below!