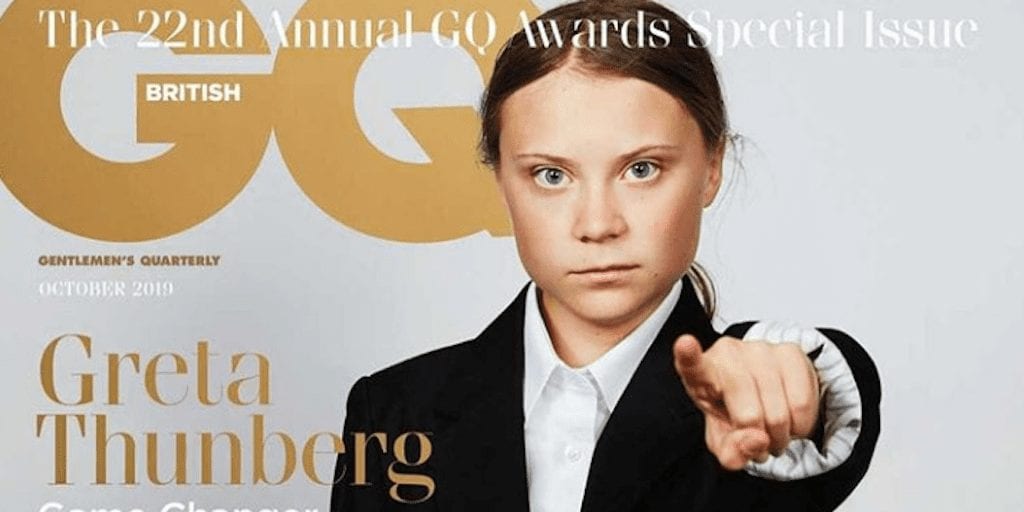 Teenage vegan activist Greta Thunberg has become the first recipient of the GQ Men Of The Year award, in an honour which has been created specifically to honour her tireless environmental work.

The Swedish schoolgirl is pictured on the front page of the magazine, which reveals her Game Changer Of The Year award for September 2019.

Thunberg came to fame when she famously began skipping school every Friday in protest of world leaders’ lack of action on climate change.

She has since inspired millions of school kids around the world to miss class and protest global warming.

Thunberg is now taking an entire year off school to tour the world and raise awareness on climate issues.

She has spoken to politicians in the UK government and at major EU conferences, and said she’s accepting the GQ award on behalf of every school student who joined the Fridays for Future protest movement.

The award which has been created specifically for the vegan activist ‘recognises Thunberg’s dedication to raising global awareness of climate change’, GQ explained.

“Her fearless dedication to raising awareness of the global climate change crisis makes her the absolute embodiment of this award and on behalf of GQ we couldn’t be prouder to celebrate her.”

Thunberg will be honoured at the GQ Men Of The Year Awards 2019 on September 3 at an event hosted by Michael Sheen.

Thunberg said: “I am very grateful and this award is for everyone in the Fridays For Future movement, everyone whose school is striking for the climate.

“We all deserve this award because together we have accomplished so much. So thank you to everyone who has been school striking as well.”

In the magazine’s interview with the activist, she discusses Donald Trump pulling out of the Paris climate agreement.

“I don’t think I would say anything to him, because he’s obviously not listening to the science and the scientists and the experts,” she said.

“So what could I say to change his mind? I would say that we need a movement to do this together, because one person can’t change his mind. We need to do that together.

What impact can Greta Thunberg’s activism have on children around the world? Share your thoughts in the comments below!