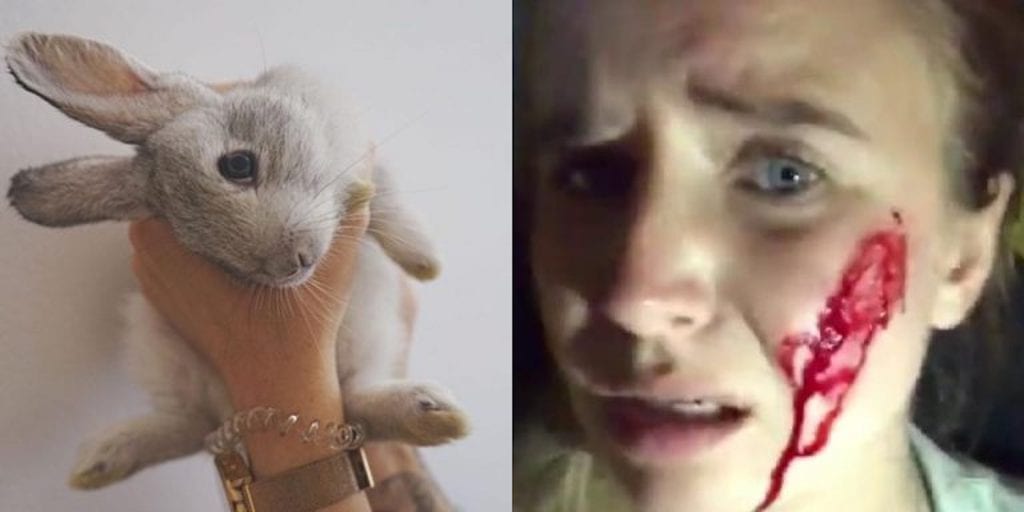 A vegan activist who rescued 16 rabbits from a farm has received death threats after farmers claimed her actions led to the deaths of other animals.

Prominent Barcelona-based activist Mythical Mia posted footage on Instagram last week in which she claims farmers chased her down a highway, ‘shot at’ her.

A separate post displayed one of the animals she whisked away from the farm. But farmers responded by releasing a report which claimed some of the rabbits she saved were pregnant or lactating.

And their offspring included 90 bunnies, which had to be killed after being left without a mother, according to La Vanguardia.

The farmers also said other animals were left with broken bones and other fatal injuries.

But an activist who was involved in the protest claimed the report is ‘false information with no evidence to back it up’.

“We were inside that farm for less than 5 minutes and we only touched the animals we rescued, who are all doing fine now despite being very sick when we rescued them,” the activist wrote.

“We did not leave any babies without their mothers as we only rescued young ones. We had a professional vet with us the whole time.

“I would like to see official documentation, a vet report and post mortem of any of these claims.”

Some vegans celebrated the activists’ actions, as the rabbits would have been killed at the slaughterhouse regardless of what happened during the raid.

Commenting on the statement from the activist, Mythical Mia revealed she had to change her name on social media due to ‘rape and death threats’ she received following the protest.

In the video posted on Instagram following the raid, the activist claimed she was ‘covered in blood’ after being ‘shot at’.

“This is what has just happened to us, look, I’m documenting the whole thing,” the clearly distressed activist says in the video.

Mia, who has 40,000 followers on Instagram and has a British accent, wrote: “Today we entered a rabbit farm and rescued 16 lives. The farmer was extremely aggressive and attacked us, strangling activists and smashing their heads with metal poles.”

Mia claimed police arrived at the farm and asked her and fellow activists to leave peacefully, which she says they did.

“After we left the farmers chased us down the motorway at 200km for an hour,” she claimed.

“We tried to lose them down a side road but they were on our tails.

“They blocked us into a dead end and surround the car with five other farmers’ cars. They were banging on the windows, shouting and threatening us. We called the police who arrived after an hour. They diffused the situation and escorted us to a ‘safe place’.”

She claims she asked police to escort the group home, but they refused.

“They let us go and 10 minutes later back on the motorway one of their cars pulled up alongside us and shot at us,” she added.

“The window exploded in my face and there was a lot of blood from all the glass. We’re currently at the hospital and waiting to go to the police station to report this crime.”

Mia said the ‘most important thing is that the non-human animals are safe’, and later posted a picture of one of the rabbits.

“They are far from that hell hole. I don’t want this to be about me at all, I just want people to know how evil farmers are. If this is how they treat humans, how can we expect them to care for animals?” she said.

“I had to delete all the footage of the rescue from my phone when the police arrived but will find and upload as much footage as possible of the animals and the rescue as soon as I can. Despite everything, I am just happy that those 16 lives are free from harm. They make everything worth it.”

Mia has now raised $1150 (€710) on GoFundMe to pay for vet bills, sanctuary costs including transportation, bedding and food.

“Due to the filthy conditions that rabbits were living in, many of them have injuries, infections, parasites, E. cuniculi etc. Anything that you can contribute to these costs would be so greatly appreciated,” the GoFundMe page says.

What do you think of the activists’ actions? Share your thoughts in the comments section below!