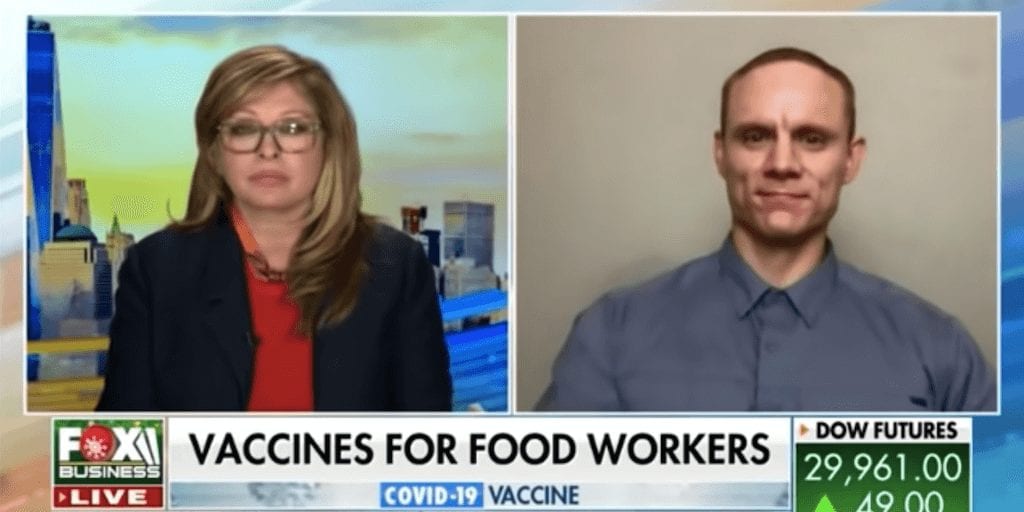 According to the vegan advocate, it is time to take ‘bold action’ with the “pandemic ravaging global society… slaughterhouse workers dying, and billions of animals suffering needlessly.”

A vegan advocate, who fooled Fox Business host Maria Bartiromo live on air by impersonating the CEO of a global meat giant company, says he doesn’t have “too guilty of a conscience,” over the stunt.

Matt Johnson is part of animal rights group Direct Action Everywhere (DxE). On Wednesday, he posed as Dennis Organ, the CEO of the South Dakota-based Smithfield Foods, and appeared on the ‘Mornings with Maria show’, on Fox Business.

In the six-minute interview, he went on to publicize the meat industry’s role in spreading COVID-19 and the chances of it causing the ‘next pandemic’ while also acknowledging what is described as Smithfield’s legacy in abusing ‘public health, the environment, animals and its own workers’.

“The truth is that our industry, in addition to the outbreaks that are happening at our plants, our industry poses a serious threat in effectively bringing on the next pandemic, with CDC data showing that three of four infectious diseases come from animals,” activist Johnson, who is also press coordinator for Direct Action Everywhere said.

“The conditions inside of our farms can sometimes be petri dishes for new diseases.”

DxE confirmed the stunt was part of its ongoing No More Factory Farms campaign, in which the group is calling on ‘government officials to proactively prevent future pandemic outbreaks by introducing a moratorium prohibiting the construction of new factory farms and slaughterhouses’, in the state, as a first step to phasing out these destructive facilities entirely.

While Johnson refused to give away the organization’s trade secrets, he told the Wrap that his group used “ fake email addresses and fake phone numbers and lots of pitches,” to dupe Fox Business Network bookers.

He added that he doesn’t feel “too guilty” about lying to get on the show because: “A pandemic is ravaging global society, the sky is practically on fire, slaughterhouse workers are dying, and billions of animals are suffering needlessly.

“The signs could not be clearer. We must take bold action now.”

While Johnson pulled off the stunt successfully, the network realized they’d been punked, and Bartiromo issued a public apology saying: “We have an important correction to make. It appears we have been punked.

“Earlier in the program, I interviewed someone claiming to be the CEO of Smithfield Foods, Dennis Organ. We’ve since learned that that was not Dennis Organ, but an imposter making false claims about the company.

“The statements that were aired are absolutely and completely false,” Smithfield’s chief administrative officer, Keira Lombardo, said in an emailed statement to NBC News in response to Johnson’s accusations.

“Smithfield is a recognized leader in animal wellbeing and care, in stewardship of the environment and in workplace safety. Smithfield employs veterinarians and other experts across the company who ensure that the safety, comfort and health of farm animals is comprehensive.”

She added: “A simple Google search for a photo of our CEO would have prevented this from happening.”

Share this story: Vegan activist feels ‘no guilt’ for trolling the meat industry while impersonating  Smithfields’ CEO on Fox news.