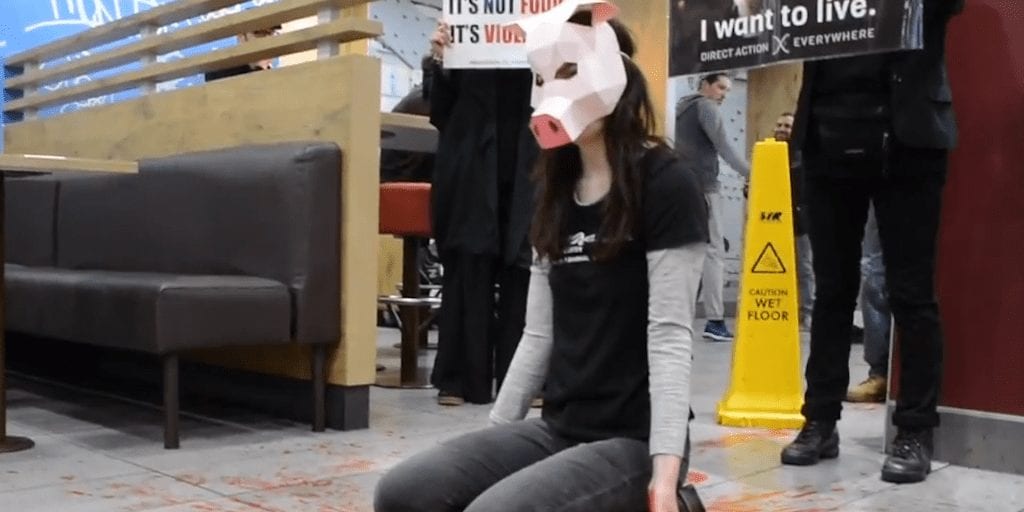 Vegan activists were arrested following an eye-catching protest at a McDonald’s restaurant in which they wore animal masks and smeared fake blood across the floor.

One member of animal welfare movement Direct Action Everywhere (DxE) covered the floor and windows in fake blood in a dramatic display.

Startled customers watched on as one member of the group knelt in the blood and said: “Animals’ bodies are objectified. Every day we reduce them from someone to some thing for us to consume.

“We have made animals our slaves. They get the worst of us with no chance of escape. How can ending the suffering of trillions not be our priority?”

Police arrived on the bloody scene within fifteen minutes and asked the activists to leave. As one of the activist refused to leave and remained sitting on the floor, the officers on scene handcuffed and arrested her – the first DxE Brighton arrest in a string of demonstrations.

Earlier in the demonstration, one activist announced to the restaurant on a megaphone: “Born to be murdered, their flesh sold for profit. These are babies who feel fear and pain and seek comfort, like we all do.

“A cruel, violent and greedy system must be challenged. Who are we if we allow innocents to die? If we value, money, taste and convenience over life itself.

“The power we have over our fellow animals is not an invitation to exploit. Might is not right!”

Activists held signs displaying pigs, chickens and cows and the words ‘I want to live’.

Activists continued chanting outside the building after being escorted out by police. They said ‘What do we want? Animal liberation! When do we want it? Now!’ while the activist was arrested and members of the public watched and took photos and videos.

Following the demonstration DxE Brighton sent a statement to Totally Vegan Buzz which which said: “We are just a mix of everyday people who have become aware of the atrocities being committed against animals in the food, fashion and entertainment industries and know that these injustices must be challenged and brought to an end.

“Most people don’t like animal abuse and would be horrified to know how much needless suffering and death went into what they consume. ‘Land of Hope and Glory’ available on YouTube is a UK documentary showing standard practice farming in this country and if people saw that, or took a look at what happens in their local slaughterhouse to factory farmed and so called ‘free-range’ animals alike, I think they’d know why we are all compelled to do something.”

What do you think of this demonstration? Tell us in the comments below!