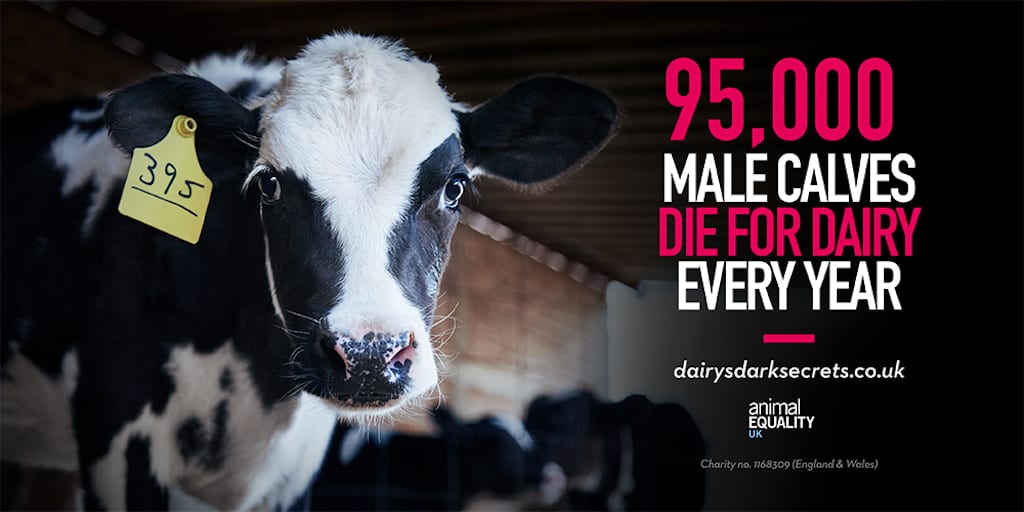 Vegan activists have hijacked the dairy industry ‘Februdairy’ initiative with a huge advertising campaign to expose the reality behind animal farming.

Billboards have been launched in ten major cities across the UK to counter the campaign in attempts to make Februdairy fail.

Februdairy encourages farmers and dairy consumers to promote positive messages about the industry, but the annual campaign has largely backfired as it fuels activists’ desire to expose the reality behind cheese and milk.

Animal Equality UK has unveiled campaigns in cities including London, Leeds and Birmingham. They feature messages such as ‘the dairy industry tears babies away from their mothers’ and ‘cows are mothers, not machines’.

The group has also launched a social media campaign #dairysdarksecrets to encourage vegans to raise awareness of widespread animal abuse.

Animal Equality UK labelled Februdairy ‘the dairy industry’s feeble attempt to promote its products to a world which is waking up to the truth’ and pledged a commitment to ‘exposing dairy’s dark secrets to the British public’.

The billboards are expected to reach 10 million people throughout the month.

“The British public will be horrified to discover the secrets that the dairy industry keeps from us all,” Animal Equality UK said in a statement.

“Cows are forcibly impregnated year after year, only to have their calves heartlessly torn away from them just a day or two after birth. They are treated as nothing more than milk machines.”

As male calves can’t produce milk, they’re often considered worthless to the dairy industry. Around 95,000 male calves every year in the UK are killed on dairy farms, almost immediately after being born, the group explained.

“The billboards will encourage people to visit dairysdarksecrets.co.uk, where they can learn more about the cruel practices that are part and parcel of commercial dairy farming in the UK, as well as the extremely detrimental effects that it has on the environment.”

Drove past this @animal_equality billboard just down the road from my home last night. Had to pull over and take a photo. The truth will out. #Februdairy pic.twitter.com/EyxrfEjw5d

Share this article to reveal the truth behind the dairy industry. What do you think of Februdairy? Share your thoughts in the comments section below!