Vegan activists staged a PEACEFUL protest at a steakhouse, so meat-eaters suggested they should be stabbed – Totally Vegan Buzz
Skip to content

Vegan activists staged a PEACEFUL protest at a steakhouse, so meat-eaters suggested they should be stabbed 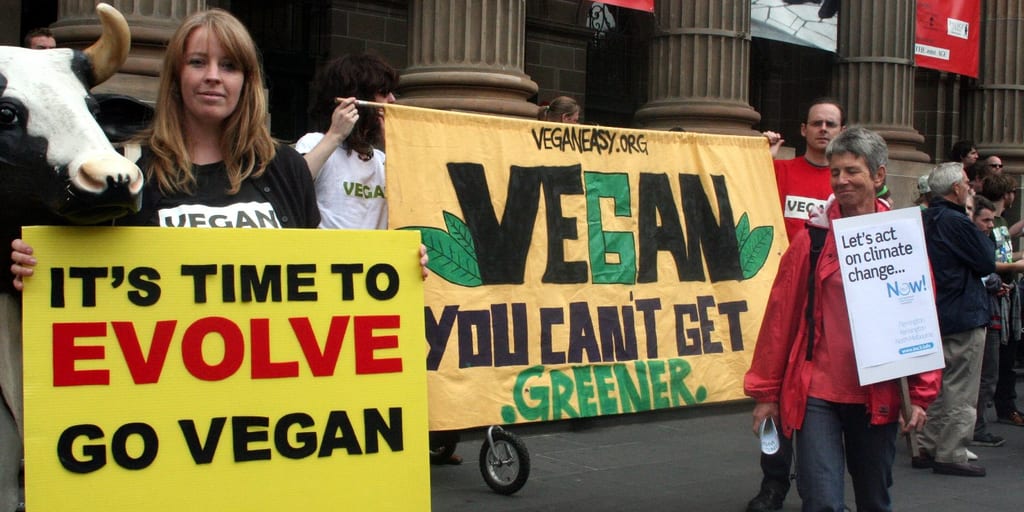 What’s the best way for vegans to capture the attention of meat eaters and make them consider their food choices?

This is the question vegan activists in the group Direct Action Everywhere asked when deciding how to promote the noble vegan cause. Bravely, they chose steakhouse Outback Jack’s in Northbridge, Australia to stage a peaceful protest. They gave diners and staff food for thought about their meaty meals by storming around the restaurant displaying provocative pictures of animals and reading pro-vegan slogans.

A video posted on the group’s Facebook was a huge success after being shared by national newspapers down under, and was even published on the Mail Online (you know what they say, any publicity is good publicity!). See how the drama unfolded below.

A member of Direct Action Everywhere spoke to the camera to explain the aim to ‘disrupt’ the restaurant, and the reasoning that they serve a wide range of meat.

The group called for ‘animal liberation’, chanting slogans such as ‘it’s not food!’ – to which others cheered ‘it’s violence!’.

Protesters display pro-vegan messages before they are snatched by staff.

One protester read: “You would think that increased intelligence would lead to an increased sense of moral responsibility.”

With some minor pushing and shoving, the group was then herded out of the restaurant by staff, but not before their message is heard by alarmed diners.

Locals to the restaurant were unsympathetic to the vegan cause, and some reactions on Twitter were straight up aggressive.

Isn’t it ironic how a peaceful protest against the killing of animals can lead some to call for violent action against vegans?

Some people were more interested in the welfare of local farmers than the lives of countless cows.

And, of course, there were the predictable protein-related jokes…never heard that one before!

What do you think of the protest? Leave your thoughts in the comments section below.