Vegan activists storm Starbucks chanting ‘Not your mum, not your milk!’ 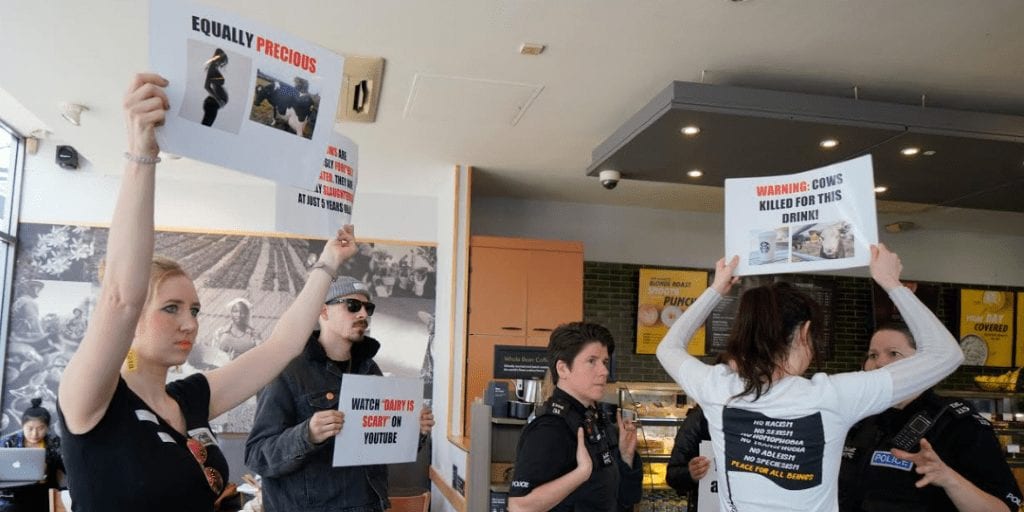 Vegan activists have stormed into a Starbucks cafe chanting anti-dairy slogans to highlight the horrors of the dairy industry.

Members of the global protest group Direct Action Everywhere (DxE) walked into one of the coffee giant’s venues in Brighton, UK.

One activist spoke into a megaphone: “Dairy cows are continuously artificially and forcibly impregnated. Every year they go through over nine months of pregnancy, they suffer through childbirth and then have their babies stolen.

“This happens for profit. This happens so you can have milk in your coffee and cheese in your sandwich. These exhausted and abused dairy cows are typically slaughtered at just five years old, a fraction of their natural lifespan.”

The protest coincided with Februdairy – an unsuccessful dairy industry campaign planned to counter Veganuary – which has largely been hijacked by activists.

‘You are not a baby cow’

DxE Brighton activists filled the cafe holding signs with boards reading ‘watch Dairy is Scary on YouTube’ and ‘you are not a baby cow’ as customers filmed the action.

One activist told customers: “Nothing is sacred to the dairy industry, not motherhood, not a babies need to be with their mother, not pregnancy, not anything.

Police was called to the scene, and after half an hour the protest moved to the outside of the building.

DxE told Totally Vegan Buzz in a statement that during a day of protesting throughout Brighton there were some hostile reactions to their message.

A female activist said: “As someone who cares about women’s rights, once I learnt about the realities of the dairy industry and how dairy cows reproductive systems are exploited and abused, how babies are taken from their mothers and how female dairy calves are destined for a life of forced impregnation, it became very clear to me that dairy is a feminist issue.”

After chanting “Not your mum! Not your milk!” and “We’ll be back” DxE Brighton members left Starbucks and marched through the streets.

Arriving at their second location of the day protesters lined the street outside Brighton Sausage Co.

The cheese-filled window was hidden behind signs reading ‘97% of newborn dairy calves are forcibly removed from their mothers within the first 24hrs’.

An organiser said in a statement: “The truth is the dairy industry is incredibly cruel and most people have no idea how much suffering and death is involved.

“21,000,000 dairy calves are slaughtered for veal or cheap beef every year. Hopefully, more people will think twice about who suffered for the milk and cheese they are buying after today.”