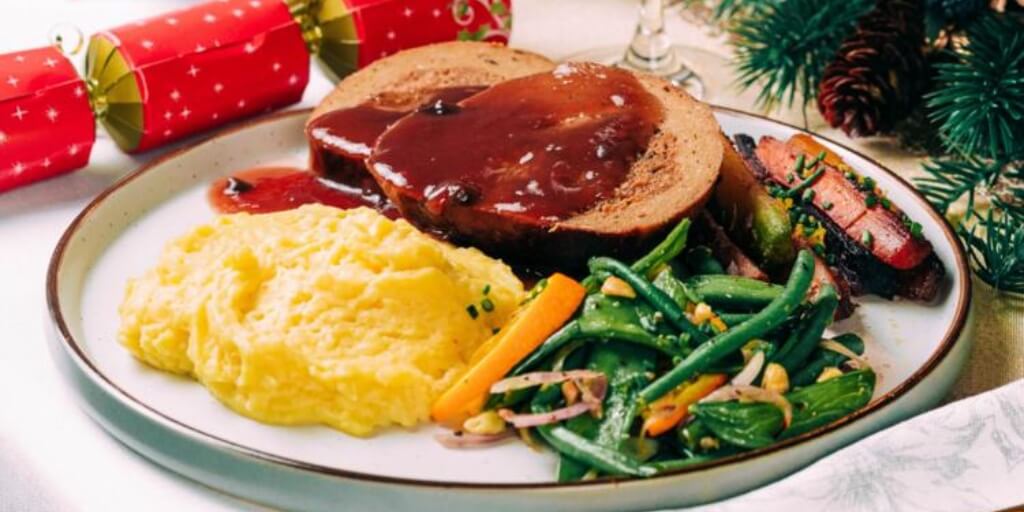 The box serves two people and is packed with plant-based versions of Yutelide favourites including vegan turkey plus all the trimmings.

The butcher is also selling a standard Christmas Meat Feast which leaves out the “peegs in blankets”, mashed potatoes, greens and stuffing for £55.

Rudy’s, which opened in November 2020, is based in Islington, London. It sells a wide range of vegan meats such as smoked ham, salami de Provence, pepperoni, and pastrami. Other options include meat-free alternatives to ribs, lobster salad, bacon, burgers, chicken liver pate, and more.

While the festive box features handmade gourmet food – which understandly is costlier – several publications have raised fingers  at the firm, comparing it to other vegan meat packages sold in budget UK supermarkets.

For instance, The Independent notes that the luxury festive box is significantly pricier than some meat-based Christmas dinners being sold by Tesco (£35) and Asda (£16.85).

Another publication said the Christmas dinner will cost you a ‘pretty penny’.

The price tag has even sparked a debate online with some keyboard warriors also objecting to the use of the word ‘vegan butcher’ arguing the term is an ‘oxymoron’.

One also wrote: “That’s at least a month’s shopping for me. Just as well I’m a big bah humbug kind of guy.”

Another added: “Nothing against vegans or vegetarian folk, but until they make their produce cheaper and within the reach of Joe Blog as opposed middle- and upper-class high earners then meat will always be on the plates of us ordinary folk.”

However, according to the one review left on Rudy’s website, the Royal treat is perfect and worth its price.  The customer wrote: “Such a great box!! We immediately bought another for Christmas!

“The meat lump is amazing and great in sandwiches with pickle FYI.

“The potatoes were lovely and crispy and everything was so perfect. And so easy too! Very pleased. Thank you.”

While many debate at the steep price tag of Rudy’s festive meal box, vegan food in general is way more affordable than traditional meat fare.

A recently published Oxford University study revealed it is more affordable to adopt a vegan, vegetarian, or flexitarian diet in countries such as the US, UK, Australia, and parts of Western Europe.

The findings indicated that vegan diets had the most reduced food costs, at between 25 and 29% lower. Vegetarian meals came in next followed by flexitarian ones. Pescatarian diets were noted as being the least affordable.