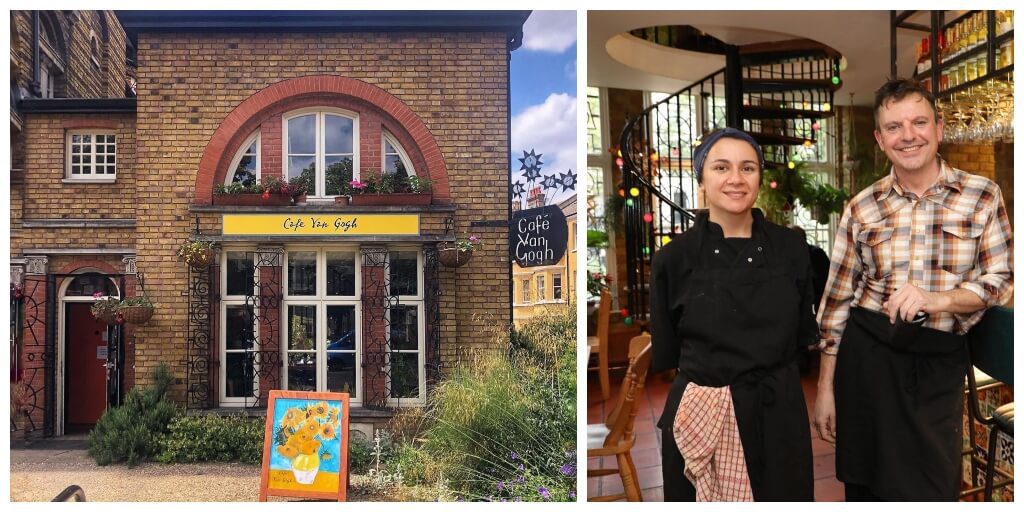 A vegan café owner has responded brilliantly to a one-star review that claimed the customer was ‘forced’ to drink a ‘porridge tasting’ oat milk cappuccino.

A customer rated Café Van Gogh – a 100% vegan restaurant in Brixton – one star  on Tripadvisor because the coffee shop didn’t have ‘normal’ milk on the menu.

The since deleted review read: “A coffee shop that doesn’t have normal milk? Very weird experience.

“It says “vegan friendly” but is just vegan.

“I was forced to have an oat milk cappuccino. It tasted like porridge.”

After reading the review, Café owner Steve Clarke, 47, who runs the non-profit business with head chef and co-owner Bonita de Silva, drafted a witty comeback  for the disgruntled customer.

Clarke replied: “You stepped into a fully vegan cafe. We make no apologies for this, it’s a huge part of our ethical stance.”

He continued that the customer would’ve been asked whether he ‘preferred oat milk or soya milk’ and could’ve left at that point.

“But instead, you allowed us to “force” you to drink a cappuccino that you didn’t like.”

Clarke further wrote: “For reasons unknown to us, you didn’t say anything to staff at the time (we’d likely not have billed you) but you chose to sign up to Tripadvisor to relay the horrors of your experience to the world with your one-star review. (Which says nothing about our café, just your palate.)”

Adding insult to injury, Clarke added: “You’ve put a broad smile on all of our faces. We love a keyboard warrior, and we hope we didn’t hurt you when we forced that coffee down your brass neck.”

The coffee shop is a non-profit social venture that ‘runs on kindness’ with a pay-it-forward scheme where customers can buy coffee for those who can’t afford it.

It also trains and employs adults with learning disabilities.

Speaking about the incident Clarke told Metro, that he normally ignores anti-vegan messages but he felt this review needed to be tackled head on because ‘we’re not anarchists, we’re not radicals, we’re not trying to change people’s minds about things’.

He added: “We’re not vegan evangelists, this is how we run our business, we try to stick to really high ethical standards and I don’t think that we could honestly do that and serve anything but plant milk.”

Calling the reviewer a ‘poor sausage,’ Clarke further said:  “I think it was just vegan baiting. I think the guy came in, a bit of a keyboard warrior, and didn’t say anything to any of the team about his dissatisfaction.

“We don’t know who it was, it’s just quite disappointing. We try to run on kindness.

“My response to the review wasn’t as kind as it could have been, I’m aware, but it did my head in.

“We’re a non-profit social enterprise, some of our team have learning disabilities, we work really hard to try and get things right.”

While a few more  one-star reviews have appeared as a ‘knee-jerk’ reaction from ‘keyboard warriors’ in response to Clarke’s post, the café has also won over some potential customers.

“‘I was forced to have an oat milk cappuccino’. Do they understand the word ‘force’ .. they should look into the dairy industry and then they will see what it really means to be forced into something,” wrote one user on café van gogh’s Instagram.

“Good for you to respond like that. Enough keyboard warriors in the world getting away with nonsense,” added another.

“Some people.  Next time I’m in London, can you please force me to eat vegan mac and cheese? Thanks,” commented a third.