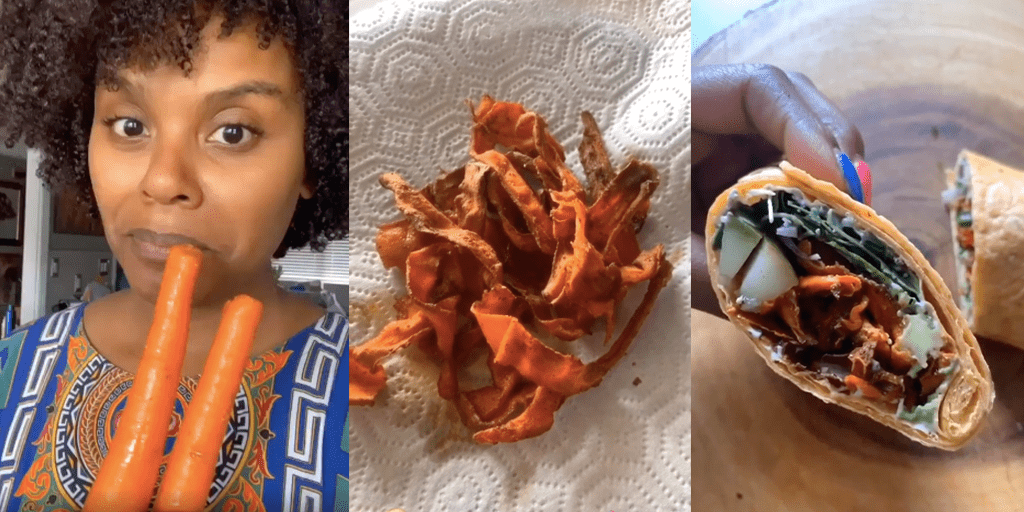 Vegan chef Tabitha Brown has posted an incredibly easy and tasty ‘carrot bacon’ recipe on TikTok that has since gone viral.

The actress and vegan food Influencer is a hit on social media for her loving demeanor, and her honest, viral, and comedic food reviews.

Brown’s off the cuff vegan recipes videos are extremely popular. She boasts of nearly two million followers on TikTok and over 859000 on Instagram.

Her recent TikTok carrot bacon recipe tutorial has already been viewed 564,286 times on Instagram at the time of writing.

Sharing the recipe, she writes in the caption: “This is one of my favorite vegan bacon substitutes!”

The recipe is incredibly simple as Brown demonstrates in the video.

“Do you see carrots or do you see bacon?” she asks as she holds up raw carrots.

She begins by peeling a few strips using a potato peeler and says: “Now you’ve got a few strips, but if you want more than this, then do that because that’s your business.

In the next step, she prepares a marinade using simple everyday ingredients such as liquid smoke, maple syrup, paprika, black pepper and garlic powder.

“Mix this all up because this is your seasoning,” Brown comments as she swirls the mixture together.

“And this is your concoction for your carrots to turn it into the bacon.”

After soaking the strips in the marinade, she cooks them in an air fryer at 380 degrees for five minutes.

The result- tantalizing crunchy vegan bacon strips, which Brown displays as she takes them out of the fryer.

“Take it out and baby you got some bacon,” Brown says.

The video has gone viral on all social media platforms and followers are in love with this simple recipe.

“I’ve seen a lot of things in my life, but carrot ? bacon ? I’ve never seen. I might try,” wrote another user.

“Cousin what in the vegan voodoo is this!! ??? We are going to try this,” added a third.

Who is Tabitha Brown?

Originally from Eden, North Carolina, Tabitha Brown turned vegan in 2017 to deal with her chronic pain. Since then she has been sharing   vegan recipes and has been featured on GMA3 Strahan, Sara & Keke, Buzzfeed, Tasty, Now This Food, and Goodful just to name a few.

After gaining immense popularity with her vegan recipe videos, Brown has turned her passion into helping others thrive by producing engaging vegan content, including regular Facebook Lives such as “Very Good Mondays”; and “Fridays with Tab and Chance”;

“I want people to know it’s a process like anything else. To take it day by day and don’t be hard themselves,” Brown told VegNews.

Share this story to help, support and inspire others on their vegan journeys.