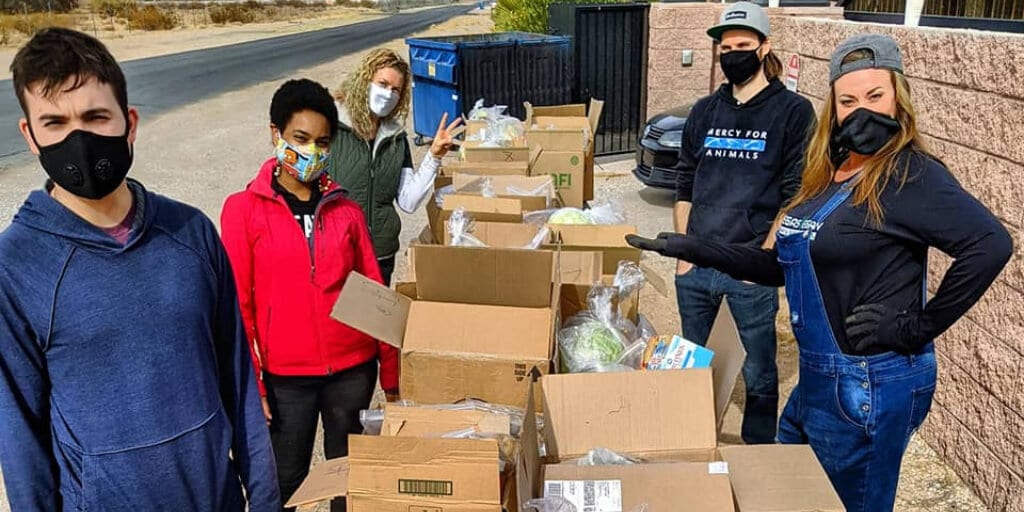 “I didn’t want to volunteer at places where I’m handing out animal products that I’m not feeling good about.”

A new vegan foodbank in Las Vegas is offering healthy and nutritious food to the many affected by the coronavirus outbreak.

The LasVegan Food Bank was set up by Mindy Poortinga in collaboration with Ranch Island Rescue Animal Sanctuary, after hearing stories of increasing food insecurity brought on by the pandemic.

Poortinga, a vegan chef had closed her vegan meal prep service last year to focus on opening a vegan culinary school/deli in the Arts District later this year.

The idea to set up a vegan food bank hit Poortinga after she signed up as a volunteer at a food bank.

“I’m an ethical vegan, so I don’t like the killing of the animals and the cruelty aspect of it,” Poortinga told Las Vegas Review-Journal

“So I didn’t want to volunteer at places where I’m handing out animal products that I’m not feeling good about.”

The food bank has hosted two biweekly events at the sanctuary.

At the first event, the team, relying entirely on donated food and volunteers distributed 20 boxes of lentils, rice, beans, nuts and other vegan groceries to people who reserved them online.

The initiative has been received well and Poortinga cannot believe how many people are interested in supporting the cause.

Likewise, the response to their boxes has been overwhelming.

While, the team was able to increase the number of boxes to 40 for the second event on 23 January, they were forced to stop taking reservations for their next distribution.

“We probably would have had like 300 people register for boxes, but we shut it down,” Poortinga said.

‘Nobody should go hungry’

She hopes to be able to arrange more distribution boxes for future events.

“Nobody should go hungry. There’s so much food waste, and people are in need now,” she added.

“So as long as people need food, we’ll do whatever we can to get them the grocery boxes.”

You can support LasVegan Food Bank, or find out when to sign up to reserve a box here.

Share this story: Vegan chef sets up foodbank to provide healthy and ethical food to the needy.