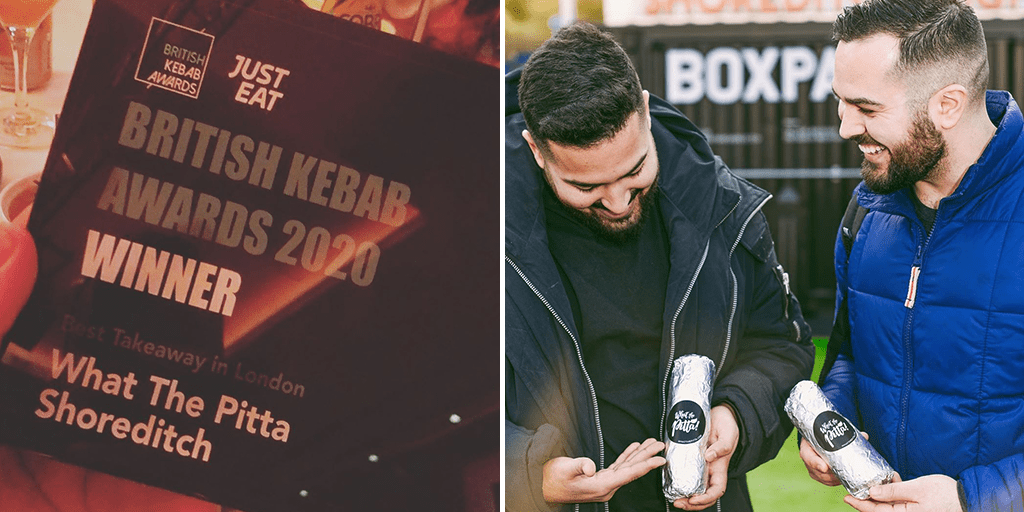 The four-location chain has scooped the Best London Takeaway award in the 8th annual award ceremony which recognizes the best kebab-makers in the country.

Co-founded by Cem Kaymaz-Yildiz and Roj Gul, the vegan kebab shop – What The Pitta beat The Charcoal Grill Plums to bag the Best Takeaway award at the eighth annual British Kebab Awards- considered the BAFTA’s of kebabs!

The duo started their venture in 2017 selling kebabs at pop-ups around London before opening their first permanent store in Shoreditch.

Since then they’ve opened branches in Hackney, Croydon, Brighton and Camden with plans for a fifth in the pipeline.

“Everybody’s doing it now – this year’s booming with veganism.”

“Not all our customers are strictly vegan, there’s a lot of non-vegans trying to reduce the amount of meat they’re eating.”

On being nominated, Kaymaz-Yildiz said: “We want to create something really good for everybody and hope being nominated for the Kebab Awards shows you can still have a really good tasting kebab that just happens to not contain any meat and is good for the planet, too.”

The finalists were nominated after receiving thousands of online votes from the public. A final shortlist followed including the shops garnering the highest votes and rankings for hygiene and online satisfaction ratings.

The winners were declared after a final round of judging by the judges, which included Conservative MP Nadhim Zahawi, Labour MP Carolyn Harris, Assistant General Secretary at Unite Steve Turner, Deputy Mayor of London Joanne McCartney AM and Samson Sohail from Cobra Beer, as well as others.

Founded by Ibrahim_Dogus in 2013, the award ceremony sponsored by Just Eat is an annual event hosted to recognise and celebrate the contribution of the kebab industry to the British economy. The kebab industry is “worth more than £2.8billion a year, supporting around 200,000 jobs across restaurants, suppliers and the food industry”.

Ibrahim Dogus, founder of the British Kebab Awards, said: “The kebab has firmly established itself as a Great British favourite, and this year’s shortlist demonstrates its ever-greater diversity, with a wider range of variations than ever before! From twists on the classics, to new vegan varieties, we are proud to celebrate one of the nation’s best loved industries as it continues to grow in new and exciting ways.”

Andrew Kenny, UK Managing Director of longstanding award sponsors Just Eat said: “We’re delighted to sponsor the British Kebab Awards, which quite rightly recognises the individuals and businesses at the forefront of the kebab industry. Not only do the shortlisted restaurants serve fantastic food, they also offer a vital source of local jobs, bring diversity to our high streets and make a significant contribution to the UK economy.”

“We did it with your help!”

A number of people congratulated them for their feat:

The mayor of London, MP Sadiq wrote: “From doner to shish, kebabs have come to occupy a special place in British culture. At tonight’s @britishkebabawards we celebrate the economic & cultural contribution of so many brilliant businesses, & how immigration has helped our city to flourish and thrive.”

“Fantastic!! Well deserved. Was in your Brighton branch today. Food was lush. ?,” wrote one fan.

Share this story if you’re a kebab fan and tag your favourite kebab shops!