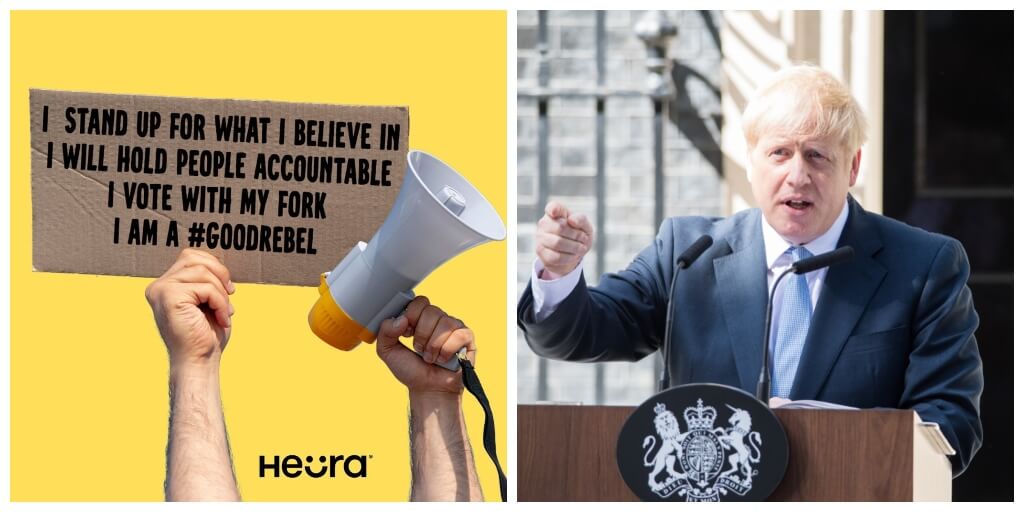 “The refusal to mention the importance of diet in climate action plans …is extremely harmful for both humanity and the planet.”

The politician has received a letter from Spanish brand Heura – the fastest-growing vegan meat company in Europe. It demands that world leaders ‘address the topic of diet as a key way to drive positive, impactful change’.

The push comes after IPCC released its grim report on climate change with stark warnings for the future of the planet and its living entities.

The letter reads: “We have listened to your words. We have noticed your (lack of) actions.

“The refusal to mention the importance of diet in climate action plans despite many evidence-based reports citing the benefits of eating a plant-based diet from an environmental standpoint (among others) is extremely harmful for both humanity and the planet. Why is this impactful way to progress being continuously ignored?”

Ahead of the event, Johnson vowed to curb its greenhouse gas emissions by more than two-thirds in the next decade to fight climate change.

According to him, the ‘ambitious’ target will set the country ‘on course to hit net zero by 2050’.

“Holding the COP26 to discuss climate gives you an opportunity and at the same time an enormous responsibility. With COP26 fast approaching, It’s time for plant-based diets to take a seat at the table,” the letter added.

Food activists and Heura co-founders Marc Coloma and Bernat Añaños have also launched a petition to demand world leaders support a plant-based diet to help save our planet.

According to the founders, they launched the company with a mission to disrupt the food industry and have always stood up “for what we believe in and we aren’t afraid to say what needs to be said.”

They added: “In light of the IPCC report and hearing Boris Johnson say more needs to be done – it’s time we focus on one of the single biggest contributing factors – what we eat.

“A switch to a vegan diet can reduce food-related carbon emissions by 73%.

“Skipping meat for 1 day a week can reduce your annual carbon footprint by as much as not driving your car for 1 month.”

In addition, they have made a video message calling out the UK government’s dangerous lack of action.

“Mr Jonson consider this a wake-up call. It’s time to acknowledge all the facts and take action,” Coloma said in the video.

Share this story: Vegan meat giant calls on UK prime minister Boris Johnson to support a plant-based diet for us and the planet.