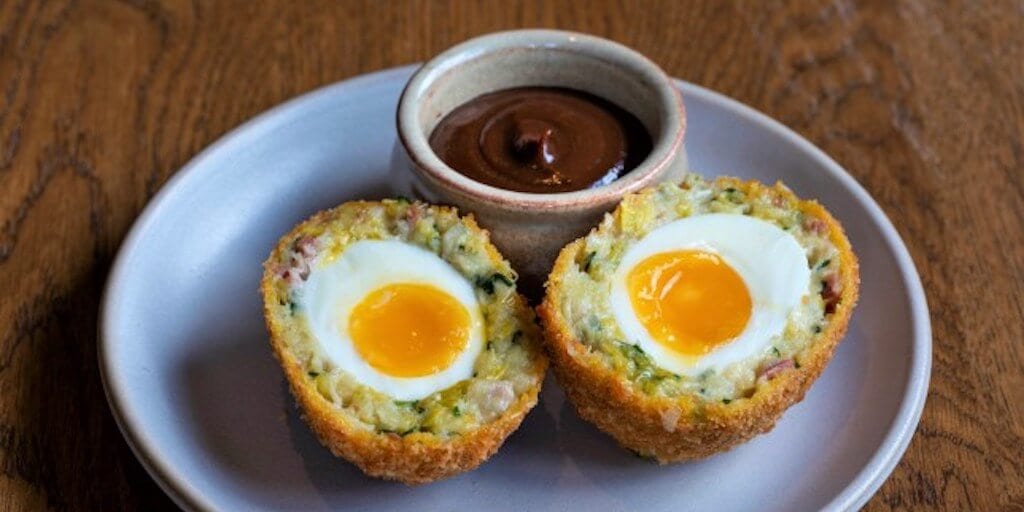 ‘[This is] a major step forward in plant-based food innovation, where products are now so realistic, they are welcomed into the world of fine dining’

A Michelin-starred restaurant in London has become the first in the UK to add plant-based meat to its menu.

The Harwood Arms, in Fulham, which is renowned for its game and meat rich dishes is now offering a scotch “egg” wrapped in meat-free bacon.

According to the establishment, the famous Glamorgan Scotch egg recipe has been veganized in response to the increased demand for meat-free options from diners over recent months.

Speaking to local news outlet i news, head chef Sally Abé said: “I decided to do it as I think it’s important to cater for everyone.

“Even though we’re famous for game and meat dishes, I don’t want anyone to be excluded from enjoying the food at the Harwood.”

‘Real rival to the original’

Calling it a ‘real rival to the original’ the vegan Glamorgan scotch egg is made from a mixture of herbs, leeks and plant-based bacon from ‘THIS’ giving it a ‘lovely smokey note’.

Commenting on the decision to veganize the venison scotch eggs recipe, which has  become a much-loved favourite over the years, Abé.added: “we knew that if we were going to offer a vegetarian version, it had to really deliver on taste and texture.

“We spent a great deal of time perfecting the recipe and the addition of THIS has given us just what we were looking for.”

THIS for its part couldn’t feel anything but triumphant on getting the “Michelin star stamp of approval.”

“Meat alternatives have often been met with skepticism by Michelin-starred restaurants and chefs, so I was quite emotional when The Harwood Arms team told us they wanted to put THIS on their menu,” Andy Shovel, co-founder of THIS, revealed.

“Our collaboration represents a major step forward in plant-based food innovation, where products are now so realistic, they are welcomed into the world of fine dining.

“To get a Michelin star stamp of approval within a year of launching is a real validation for all of the hard work that our team has been putting in and chefs at Sally’s level don’t mess about when it comes to ingredients,” he added.

Share this story: Vegan ‘meat’ debuts on a Michelin-starred menu for first time in the UK